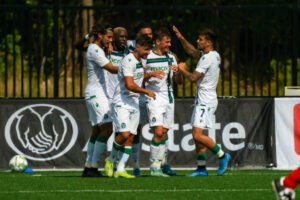 Yesterday, York United (nicknamed the Nine Stripes) won big against the Master’s Futbol Academy (nicknamed the Saints). They started off their Canadian Championship campaign with a 5-0 win over Master’s Futbol Academy in the 2021 Canadian Championship. York played well defensively in the first half and only looked vulnerable at the start of the second half. The Nine Stripes will now play in the quarter-finals against Toronto FC sometime in September.

Full Game Summary: #YorkUnitedFC had the majority of the shots on target.

Master’s Futbol Academy had no shots on goal in the first half.#YRKvMFA | 5-0 | #CanChamp

York United FC threatened the Saints with a wave of attacks for most of the game including the first five minutes of the game. Diyaeddine Abzi shot off a free-kick was off-target in the sixth minute. Saints goalkeeper Koskinas got brave and got the ball in the ninth minute. York played good defence in the 11-minute. Osvaldo Ramirez was offside against Masters in the 11-minute.

Ramírez was off-side again. Master’s made a good defensive play in the 18-minute to clear a Ramirez cross. Masters made a good attack but were unable to get a good scoring chance in the 22-minute. Sentour’s header was off-target in the 23-minute. Ferrari’s shot went straight to the goalkeeper.

Master’s Futbol Academy got two yellow cards in quick succession. York continued pressuring the Saints, which led to two goals. Max Ferrari creates a free-kick for his team. Wright gets a yellow card. Masters goalkeeper Koskinas made a good save. Dominick Zator got a head on it but was off-target in the 38-minute.

38′ Isaiah Johnston finds Max Ferrari, who scores to give #YorkUnitedFC the opening goal of the game.#YRKvMFA | 1-0 | #CanChamppic.twitter.com/fOQTt0nCys

Isaiah Johnston did a terrific job finding Max Ferrari, who scores the first goal of the game. York got the ball back in the 42-minute. Petrasso gave a good pass to Ramirez, but he just barely was unable to touch the ball. Phillips for Masters had a good chance in the 45-minute but a good tackle by a York player ended the danger. Petrasso’s shot was wide and off-target. However, Petrasso would not be denied as he made a great pass to Osvaldo Ramirez for York’s second goal of the game.

Master’s Futbol Academy had two very good chances early in the second half. Hussein got shots on goal, both saved by the Nine Stripes’ goalkeeper Nathan Ingham. This was the only time where Master’s Futbol Academy threatened York’s backline. The only other time they had a good scoring chance was in the 87-minute. However, that was because of a mistake made by York United goalkeeper Ingham. Besides that, it was all about the Nine Stripes.

59′ #YorkUnitedFC scores! Jordan Wilson gets a strong header off from a Michael Petrasso cross.#YRKvMFA | 3-0 | #CanChamp pic.twitter.com/Vtx5SsWapm

Abzi hit the crossbar in the 49-minute. However, just six minutes later York got the goal that sealed the game for the Nine Stripes. Petrasso’s cross to Jordan Wilson gave York a very strong 3-0 lead in the second half.

Álvaro Rivero hit the bar in the 65-minute. Wright could not put the shot on target in the 76-minute. A free-kick was given to York in the 83-minute. This free-kick led to a York penalty as Chrisnovic N’sa drew the foul. Julian Ulbricht would score the penalty in the 85-minute. He would also score in the 90+1-minute of play.

York will now resume CPL season play as they also host the HFX Wanderers FC at York Lions Stadium on Wednesday, August 25. They will then play on the road in Hamilton against Forge FC. The game will take place on Saturday, August 28. Both games will be shown on OneSoccer.

Three Takeaways from the Game:

Michael Petrasso of @yorkutdfc is the Toyota Player of the Match

The Canadian Premier League’s record is perfect against League1 Ontario and PLSQ teams with four wins in four games. York United continued the perfect record of CPL teams beating other teams in the third division. In this game particularly, there was a large gap between York United and Master’s Football Academy. Except for maybe the start of the second half, York United dominated the game from start to finish.

York United missed a few big opportunities to score. Some of these chances will need to be put away against an MLS side. This is even when TFC has not been in form this year. No disrespect to Master’s Futbol Academy, but there is a large difference in standard between a League1 Ontario and an MLS team. An example of this was in the 42-minute when Ramirez could not reach Petrasso’s pass, which would have meant a certain goal.

1992 was the last time two first-tier division teams faced each other from the Greater Toronto Area. The last time two teams from the Greater Toronto Area faced each other was in the last year of the Canadian Soccer League’s existence. Both the Toronto Blizzard and the North York Rockets were members of that league. Yes, both TFC and the Nine Stripes play in different leagues, but both MLS and CPL are considered tier-one leagues by Canada Soccer. The game will take place at BMO Field and will be shown on OneSoccer. It is unknown when the game will be played, but the game will take place sometime from September 14-22.