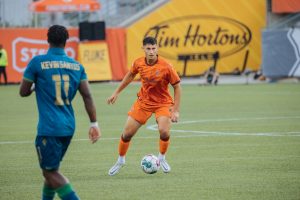 ANALYSIS – Ahead of last Saturday’s win against Forge, York United coach Martin Nash asserted that any team can beat any team in the Canadian Premier League.

In his pre-match press conference, he detailed how his seventh-placed side could challenge Bobby Smyrniotis’ perennial juggernaut of a team.

“I think we’ve got to be a little more compact than we have been,” said Nash.

“I don’t think our [defense] is the problem, I think it’s always with the team.”

He was proven right: York came out of Tim Horton’s Field with a statement 3-1 victory. Nash’s plan worked to a tee, with The Nine Stripes pressing as a unit high up the pitch and preventing Forge from exploiting the half-spaces.

After the game, Nash explained how his tactics unfolded.

“We did a good job keeping our lines tight and not letting them into the pockets, where they are so dangerous,” said the Regina native.

Although there was certainly some luck involved, York United looked like a much-improved side. Beating Forge – and getting their fourth win in six games – will surely be a morale booster.

Let’s take a look at how it happened.

Osaze De Rosario got the service he needed

Now that York has made several new signings on the flanks, striker Osaze De Rosario finally has the service he needs. It showed in the first goal, with winger Kévin Dos Santos beating his man before fullback Paris Gee put in a cross for DeRo:

Osaze De Rosario silences the crowd with a fantastic finish!#CanPL |

30 minutes later, keeper Eleias Himaras (who recently signed for the team after joining on an emergency basis) kicked the ball upfield for De Rosario. The 6-foot-1 striker took it down, left two players in the dust, and fed Molham Babouli for a shot on target.

This play exemplifies DeRo’s ability as a target man. With his combination of size and skill in small areas, the 21-year-old is able to link up play well. With dangerous forwards like Babouli behind him, we should see more of this side of his game.

Early in the second half, Golden Boot-winner Tristan Borges smashed one from outside the box off a short corner, tying the game at one.

A couple of weeks ago, that might have deflated York United. But with an injection of talent on the pitch and a commitment to Nash’s tactics, they kept on attacking. It took just six minutes for Chrisnovic N’sa to produce a banger of his own.

Babouli sent a long ball to Ronan Kratt, who was pushed up on the right wing, who passed it to N’sa. The Montreal-born defender took an excellent first touch into space, beat his man, and unleashed a thunderstrike:

The 23-year-old has been one of the league’s premier fullbacks since joining the league in 2019, but that was his first CPL goal.

He had plenty of fun talking about it post-game.

“I’ve been working on that left foot shot for like six years,” he told the press with a smile.

“It’s nice to be home. You want to join any team that has the ambition to win. And I think this club does.”

In his first interview as a York United player, Mo Babouli chats about familiar faces, objectives & always having something to prove.#YorkUnitedFC | #UnitedByYou pic.twitter.com/vYPiMpGSMK

When asked about his new teammate, Babouli, N’sa referred to him as a “magician.”

“Sometimes when you are struggling, [you just have to] give him the ball and say ‘Mo, do something magical,” he said.

N’sa made a terrific run down the right flank and passed it inside to Kratt, who fed a slaloming Babouli. With the ball on his right foot in tight, and a defender covering the left side of the net, the former Forge man smashed it top corner at the near post.

MO BABOULI IS BACK

@YorkUtdFC go up 3-1 as Babouli scores against his former team, @ForgeFCHamilton, with a thunderous strike!#CanPL |

It all happened in a matter of seconds, but that’s all Babouli needs to punish the opponent. After that, all York had to do was see out the game.

It was the first time in months that Martin Nash’s men have held a comfortable lead. For a team who has struggled to finish their chances all season long, adding a forward of Babouli’s ilk already looks like a massive move.

Next up for York is Calvary on Saturday at 3:30 EST at the Spruce Meadows. The game will be shown live on OneSoccer and Telus.

We are just over a month removed from York squeaking out a 1-0 win with 10 men in Alberta. With 23 points, The Nine Stripes sit 11 points behind Cavalry, who hold the final playoff spot. Safe to say the implications will be massive. York has also now won two games in a row, which includes a previous win against FC Edmonton.

Making the playoffs might be a long shot, but that doesn’t mean York United is going to keel over. N’sa told the press not to count their chickens just yet.

“It’s never done. There are seven games left, so let’s win seven in a row.”