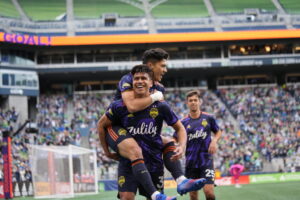 Seattle, Wash. — Xavier Arreaga scored the game-winning goal against familiar foes, the LA Galaxy. After not scoring in their first two MLS games, Seattle scored three goals in their 3-2 win over Los Angeles at Lumen Field.

Xavier Arreaga is our @Toyota Man of the Match!

First half: Back and forth affair

Seattle had failed to score in their previous two league games, losing to Nashville and Real Salt Lake in the first two-game weeks. However, they are finally up and running after a thrilling contest in Washington State.

LA Galaxy went ahead after just six minutes, and the fans in Rave Green may have feared the worst early on. It was Javier Hernández who scored the opening goal. He slotted in from inside the box after being teed up by Rayan Raveloson.

Jordan Morris@JmoSmooth13 finds the equalizer and it’s 1-1 at Lumen Field!

After scoring in midweek against Club Léon, Jordan Morris looks to have started to recapture his best form. Indeed, it was the Sounders #13 who leveled only 10 minutes later. He was alive in the box and reacted fast enough to score the Sounders’ first league goal of 2022.

The one and only @_fredymontero

Without Raúl Ruidiaz, Seattle is relying on both Morris and Fredy Montero for creativity going forward. The latter won a penalty in first-half stoppage time that he duly converted himself to give Seattle the lead going into the halftime break.

Second Half : Xavier Arreaga steps up

Douglas Costa’s free-kick just three minutes into the second half leveled things up yet again – albeit with the aid of a deflection – to wrong-foot Seattle keeper Stefan Frei.

As the game started to creep into the final quarter, it was the home side that struck the decisive blow. Alex Roldan’s free-kick delivery was inch-perfect for Xavier Arreaga to beat Galaxy keeper Jonathan Bond to the ball and head in for the winner.

Xavier Arreaga scores and we take back the lead!!

Galaxy pushed for another equalizer, but the closest they came was Efraín Álvarez’s effort from outside the area hitting the woodwork. Seattle will be relieved to finally get off the mark but will be concerned that defender Yéimar Gómez limped off injured with the midweek tie against Club Léon fast approaching.

How did Seattle finally clinch their elusive W?

The fastest team to reach 200 wins in @MLS history.

As so often with the Sounders, they look far more dangerous when they let teams come onto them and then counterattack. Brian Schmetzer’s team had just 36 percent of the possession but took their chances when they came.

Seattle’s problem is often that teams stand off them and retreat into a 4-5-1 or even 5-4-1 on occasion. That leaves no space behind for players like Morris, Roldan or Montero to run into. They struggle to break down stubborn defenses and actually look more of a threat playing on the break.

Twice Seattle has dominated possession in their previous league games, having the majority of the ball but never looking like scoring. In midweek against Club León they actually had close to 30 percent possession at home – but dominated in terms of chances created and won the game 3-0.

Schmetzer’s formula of allowing the opposition to dominate the ball, but be dangerous on the counter must be the approach if Seattle is to get through to the next stage of the CONCACAF Champions League and maintain their winning run in the league.