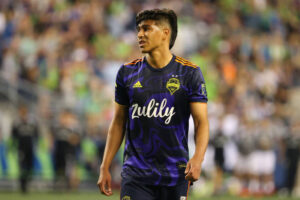 SEATTLE – Xavier Arreaga and the Seattle Sounders hosted LA Galaxy in a back-and-forth afternoon match in Major League Soccer. Rave Green were coming off a big win in CCL but were pointless in league play. The Galaxy had two wins in two games, but were facing a measuring stick game with similarities to last year.

The visitors had a fast start. Just six minutes in, Raheem Edwards cut inside to start a passing sequence that led to a tap in for Chicharito. It was his second goal of the season. Seattle equalized in 17 minutes off a corner. Off a deflection, Jordan Morris scored from close range while falling to the ground.

Los Angeles would be down 2-1 at halftime despite the good start. Freddy Montero drew a penalty on Julián Araujo and converted.

It took just three minutes of second half play for Douglas Costa to open his MLS account and tie the match 2-2. Off a free kick from the edge of the box, Chicharito fakes a shot before Costa’s ball went into the far corner, possibly off a slight deflection off the wall.

Both teams had opportunities after that, with a hit post each and Chicharito nearly getting a free header inside the six. After hitting the post, an Xavier Arreaga header made it 3-2 in the 72nd minute. Efraín Álvarez hit the post minutes later on almost the exact same play he scored on in Charlotte.

48′ Douglas Costa’s free kick goes off the wall and he has his first #LAGalaxy goal! Tie game! #SEAvLA | 2-2 | #MLS pic.twitter.com/mJCDO2cpe2

72′ Arreaga with the header and #Sounders have retaken the lead! #SEAvLA | 3-2 | #MLS pic.twitter.com/QDZNaY7Y3f

Sounders first win: Seattle finally picks up their first league points of the year. This match was also their 200th MLS win in club history. The performance was good. They looked like themselves, similar to the midweek CCL performance. The hot takes about them losing their first two MLS games can cool down now.

Galaxy fail test, but are getting there? Greg Vanney’s side could make the argument they deserved a point. The DPs both scored. They hit the post multiple times. Kévin Cabral was proactive but lacked the final product. They gave up two goals on set pieces and a soft penalty.

Set pieces: The Galaxy scored on a direct free kick. Seattle’s first goal was off a corner. Their match winner was off an unorthodox free kick. For all the chances and exciting moments from the run of play, this game came down to big moments from restarts.