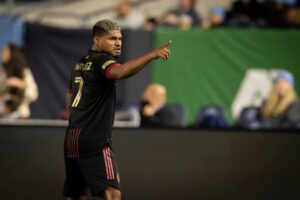 The Atlanta #7 had a tough 2020, and started to show glimpses of his old form last season. Will he be unplayable again in 2022?

12 goals in 19 starts – a record any striker would be pleased with in any league.

For Josef Martinez, though, this was probably a record he felt he could have bettered – and will be aiming for even higher standards from himself next season.

An impressive start that saw him break records

After signing for Atlanta United from Italian club Torino in 2017, Martinez hit the ground running from the very start of his time at the Georgia franchise. He scored 19 goals in 21 games in his first season, only to smash those records the following year.

35 goals in 39 games is a seriously impressive return. He became the most decorated single-season player in MLS history by winning the League MVP, All-Star Game MVP, Golden Boot, and MLS Cup Final MVP.

Then came the disastrous 2020 campaign.

Martinez played just one game before injuring his knee – more specifically his ACL – against Nashville SC. His season was over, and he didn’t play again for over 12 months at the start of the 2021 season. It took him a while to get up to full fitness, but he started to show his brilliance once again this year.

ACL injuries are tough to come back from – is he almost back to his best?

ACL injuries are always a worry for those players who are the wrong side of 25. The body takes longer to recover, and the concern is always that the player never fully recovers their capabilities – especially when it comes to pace. As well as his quality in front of goal. It was his electric pace that set him apart from the rest, and it’s great to see that he has started to get back to the form he has previously shown.

His current MLS stats have him at 94 goals in 118 games – a ratio of 0.79 goals per game. As long as the Venezuelan stays injury free, it’s extremely likely that he will continue to smash records in MLS and show himself to be one of the best strikers to grace North America.

The post Will Josef Martinez earn himself “GOAT” status in Major League Soccer? appeared first on Last Word On Soccer.