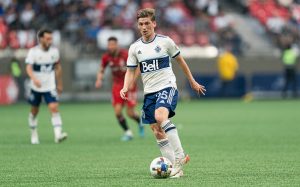 After making his Dundee United debut at 16, Ryan Gauld seemingly had the world at his feet. The likes of Everton, Roma, Liverpool, Manchester United, and even Real Madrid were credited with an interest in the Tannadice teenage talent.

However, it was Sporting Clube de Portugal that won the race for the youngster dubbed ‘Mini Messi’. The Aberdeen-born midfielder was quick to pinpoint Sporting’s excellent record in youth development. Examples include Nani, Luis Figo, and of course, Cristiano Ronaldo.

A weird and wacky career saw Gauld play at three other Portuguese clubs, alongside a stint back in Scotland with Hibernian, before signing with Vancouver Whitecaps in 2021. The 26-year-old has become Blue-and-White’s main man over the past few seasons.

He’s been a revelation for Canada’s only MLS team in the Western Conference, fully worthy of becoming a Designated Player in British Columbia.

So why has he never been selected for Scotland’s senior squad and made an appearance for his nation?

Ryan Gauld: Why Does He Continue To Be Neglected by Scotland?

Has the SFA Not Got his Canadian Number?

Not since Gordon Strachan’s tenure as the Tartan Army boss has Gauld been in contention to pull on the dark blue. With over ten caps for both the Under-19s and Under-21s, he’s yet to register a full international appearance despite previously being called up in 2014.

Speaking recently to MailSport, he said:

“It’s genuinely not something I think about now. A year or two ago, when I thought I was doing really well at Farense, I felt it might happen. But I’m at a stage now where it doesn’t enter my mind. When there’s an international break I’m looking at having a few days off and going somewhere nice in Canada with my missus. If it happens, then great. But I won’t be upset if the next squad comes out and my name’s not there. I haven’t had any contact from Scotland or the SFA since Gordon Strachan was in charge,” Ryan Gauld said. He would also say this:

“There’s been nothing at all. But they obviously have their reasons. The manager seems to have a group of players that he likes and he’s going with them. They just played Ukraine away when they had 15 or 16 players missing. But he still managed to get a squad together. So I know I’m nowhere near it and that’s why I won’t get my hopes up.”

In recent years, Scottish football fans are seeing more and more Scots play their game outside the UK. The last Scotland squad included two defenders that have opted to play in Italy. Aaron Hickey – who is back in Britain with Brentford – enjoyed a super spell with Bologna.

Jack Hendry left Celtic for KV Oostende and later Club Brugge in Belgium. He’s since moved to Serie A, joining Lombardy-based outfit Cremonese. Hendry and Hickey were arguably two of Scotland’s best performers in the triple header against Ukraine and Ireland. Josh Doig is another defender plying his trade over there with Hellas Verona.

In the middle of the park, Liam Henderson was something of a trendsetter for Scots in the last decade. The former Celtic youth graduate had played for Rosenborg in Norway, on loan, before a spell with Bari and became the first Scot to play in Italy’s top tier since Graeme Souness as he helped Hellas Verona to promotion.

Spells as Empoli and Lecce followed, before rejoining Gli Azzurri, with Hibernian his last club in Britain. Lewis Ferguson has been involved with the national team since September 2021, and eventually left Aberdeen to join Bologna where Aaron Hickey had developed immensely.

However, most of Scotland’s midfielders and attackers still play their football in Britain. If Ryan Gauld were to be selected, he’d be something of a rarity. Just as Johnny Russell was. Just as Lewis Morgan arguably should be too.

There are countless examples of Scottish stars heading overseas, all with varying success. Paul Lambert became the first Scot to win the European Cup with a non-UK team when he signed for Borussia Dortmund. John Collins was a league winner with Monaco.

Lack of Scots Success in the States

However, MLS has never really had a success story that results in Scotland’s selection.  Mo Johnston is more fondly remembered at Nantes than at the tail end of his career with the Kansas City Wizards as they were known then.

Richard Gough was also in Kansas at a similar time, being named in the MLS Best XI with the Wizards but that was four years after ending his association with the national team. The likes of Steven Caldwell, Shaun Maloney, Kris Boyd, and Kenny Miller had all essentially cut ties with the Tartan Army before moving to the States and Canada.

The #VWFC will play in the #SCCL23 after winning in a penalty shoot-out against #TFCLive. #OneSoccer#VANvTOR | 1-1 (5-3) | #CanChamppic.twitter.com/We93GaXXpC

There’s no escaping that Ryan Gauld is a talented player. Lewis Morgan could be a great option in the wide areas. The Scotland national team is crying out for some pace on the flanks, creativity in the middle of the park, and ideally a world-class marksman in the final third. Gauld has also stepped up for his club team when they needed it. Examples included assisting in Brian White’s goal in the Canadian Championship Final against Toronto FC. (Brian White goal clip from OneSoccer). A game that went to penalties and resulted in Vancouver winning the Voyageurs Cup. Additionally, he played a big role in the win against Colorado Rapids on August 18.

But, for whatever reason, playing your ‘soccer’ in the States isn’t taken as seriously as it is in a top-five nation or elsewhere in Europe. It’s a sorry situation given Gauld is deemed a more attractive selection in Portugal’s second tier, to the SFA hierarchy, than he is in Canada.