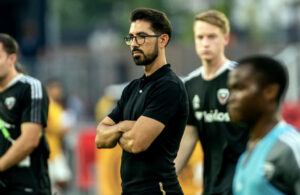 Editorial — It goes without saying that if you’re winning soccer games by a margin of seven goals to one, you’ve enjoyed a fantastic day at the office. But the irony is that DC United and its’ demolition of Toronto FC was not even the best performance they’ve put in lately; their double-header of victories over Inter Miami was the pinnacle of a much-improved run from Hernán Losada’s men.

It’s a spectacular turnaround for the Black-and-Reds, who were so poor in 2020 that only FC Cincinnati finished below them in the Eastern Conference. With five defeats in their opening seven games this term, you could have forgiven their supporters for preparing for the worst once more.

Yet, they’ve only lost one of their last five, with three of those games resulting in a win. That’s the measure of a team that’s certainly found their attacking swagger of late.

These are early days in the season, of course, but if DC continue in this vein of form, they could still gate-crash the play-off party. You can wager on the MLS at a number of different sportsbooks, and DC’s odds to lift the MLS Cup are still long to say the least – you might be better off wagering on the slots or the roulette wheel at the leading online casinos in Canada or the States.

But even so, the question remains – what has been the catalyst for their remarkable change of fortunes?

Getting It Right at Both Ends

In soccer, the numbers don’t always tell the whole story. But in DC United’s case, the 2020 campaign can be summed up neatly by the digits delivered at both ends of the pitch.

Last season, they scored an average of 1.09 goals per game, and at the other end, only Montreal had a worse defensive record, with DC letting in 41 goals in just 23 outings, averaging 1.78 goals per game.

Fast forward to the present day, however, and the picture is looking far rosier. Although it’s a small sample size in the 2021 campaign so far, DC are scoring at a rate of 1.42 goals per game – while conceding an average of just 1.17 goals every 90 minutes. That’s a complete turnaround from the season before.

That just goes to show that the changes made both in defense and attack have yielded the desired results.

New recruits in defensive areas have made the key difference. Andy Najar has been a revelation at center back after joining from Los Angeles FC, while Tony Alfaro has already repaid the faith shown in him. With Frédéric Brillant also much improved this time around, DC’s defensive base has been more solid as a result.

“Little by little with this big heart and fighting spirit we are coming back in those spots where D.C. United deserve to be.”#DCU | @LeidosInc pic.twitter.com/YSJ6rl8H9V

Best of all has been Brendan Hines-Ike, whose career was in danger of stalling in Belgium before he made his return to his native America. He has looked like a rock-solid presence in the defensive line, and his signing has proven to be invaluable.

From an attacking perspective, it’s easy to forget that the Black-and-Reds have lost players like Wayne Rooney and Luciano Acosta in recent years, and it’s always difficult for a franchise lacking in the ‘sex appeal’ that European soccer is notorious for to redress the balance when it comes to recruiting players.

But the signs are promising. Adrien Perez, another off-season recruit from LA, may still need to break his goal duck in the capital, but his performances have been encouraging. In just eight appearances, he has served up two assists and won a Man of the Match trophy.

Ola Kamara, the veteran, has already scored more goals this campaign than he did in the whole of the last. That goes to show how motivated the Norwegian is in this more expansive setup, and of course, it helps when you have a player of the quality of Paul Arriola supplying the ammunition. The winger missed much of last season through injury, and his renaissance has been an integral part of DC’s rise.

With Nigel Robertha also proving to be an interesting signing, with two goals in as many games, this is a more balanced DC United roster, with quality at both ends of the pitch.

Even in the depths of despair, Ben Olsen remained a popular figure at Audi Field.

Alas, his sacking came as no surprise in the fall of 2020, and after Chad Ashton carried the team through to the end of last season, the hierarchy at DC United was left with an important decision on their hands – which head coach would be willing to take on the challenge of managing a fallen giant of American soccer?

So, in came Hernán Losada, in what is just his second head coaching role. The Argentine had impressed in his spell as leader of the Belgian outfit Beerschot and left the club with a handsome 47% win rate.

Of course, there are risks attached to giving a job to a head coach who has never played or managed a team in the MLS before, but Losada brought with him fresh ideas and a complete change of system that has so far gotten the best from his players.

He prefers a South American style 3-1-4-2 system, which ensures he has plenty of bodies in the defensive phase, before numbers bomb forward down the wings, in support of the front two.

The numbers speak for themselves, with DCnow defending better and scoring enough goals to win any game of soccer. As long as they can keep key personnel fit and free from injury, there is absolutely no reason why their good form cannot continue.

Losada has been a key figure in the renaissance of DC, and the tactical flexibility he has shown – particularly in the past few weeks – suggests that the Red-and-Blacks have a clever and insightful head coach at the helm.

These are exciting times indeed for a team written off 12 months ago.

The post Why DC United’s transformation is the story of the MLS season so far appeared first on Last Word On Soccer.