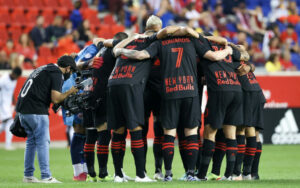 What a difference a month makes. The New York Red Bulls went into Orlando, without a win on the road and kicked off July with a 2-1 upset of the Lions.

It was a seminole result, one that had the fan base giddy of what was to follow. The Red Bulls were in the thick of the playoff race in a beast of an Eastern Conference that passed a huge test. All looked good for Gerhard Struber and his young squad — the youngest in the league.

From that game on July 3, New York hasn’t won since. And after another disappointing result to open August, a 0-0 draw at home to ineffective FC Cincinnati, the Red Bulls are now on the outside looking in the playoff picture. In a game in which they outshot the opposition 23-9, hit the post and had seven corner kicks, nothing hit the back of the net. The form book on them recently is awful. One win in their last eight games, and winless in its last five. It’s especially disappointing when New York held leads in two of those last five, only to lose it and settle for draws.

Boos rang out after the final whistle Wednesday night. Struber also tweaked his formation against Japp Stam’s side, opting for a flat 4-4-2 instead of the usual diamond. It was surprising to see Struber and his players find difficulty in breaking down their opponents. And so here we are, in August wondering where the Red Bulls stand.

91st MINUTE, pres. by @drinkBODYARMOR: Andrew Gutman on his return to the pitch against FC Cincy pic.twitter.com/hT2n9qagd4

A six-match August that could define their season

A look around the league and the teams on the peripheral of the Red Bulls show that this month could be the most crucial of their campaign. Six matches this month, one already down. New York heads to Chicago Sunday night hoping to improve their poor away record. The aforementioned victory over Orlando remains the lone win on their travels. One win in eight tries away from Harrison currently puts them in a tie for the second-worst in the conference, and seventh-worst overall. Chicago is in a rut too, with its own five-game winless run and in 12th place. But as is already the case against Cincinnati, no game is easy.

After that is a trip up north to Montreal who have been one of the surprises of the league. Currently in eighth, one point behind Columbus for the last playoff spot. It’s a game that can go a long way in determining who’s in and who’s out of the playoffs. Then a huge pair of tests come after.

First is a home game against reigning champs Columbus. They’ve already won at Red Bull Arena in their game against New York City a while back and remain one of the most formidable teams in all of MLS. The Crew and Red Bulls haven’t squared off since the playoff game last season, Struber’s first game as coach. Coming after is the big one, the derby against New York City FC. The Cityzens are no joke, the second most goals scored in the East boasting creativity in bunches. They also hold the second-best “home” record in the league, and play some beautiful football at times. New York finishes the month at home against the Chicago Fire.

The patience required for a playoff push

Tom Edwards may have hinted at something when discussing the scoreless result against Cincinnati.

“I think it’s a hunger thing, a confidence thing really. We had them pinned back all game and should have created more. We worked in training on moving the ball around, but in the end when the ball comes into the box I think we need a bit of desire and hunger to get on the end of it.”

Lamenting the chances and quality in the final-third have halted the Red Bulls lately, it’s something they’ll have to correct to get better results.

All may not be doom and gloom for this team. This squad has been up and down at times and has also hung around against some of the best in the league. But the pendulum does swing quickly in Major League Soccer, and right now the Red Bulls are close to a downward spiral.

But Struber keeps the faith, stating, “We are very close to winning many games and picking up points. We know we have not had much luck away this season, but I have patience and a big trust in our group.”

We’re going to get a better sense at how to judge this team. Are they average? Or will they kick into higher gear? New York has made the postseason every year since 2010, it’s one of the things they’re proud of. But with this latest slide, the mood and play will have to change pretty soon this month. August — where this notoriously demanding fanbase will want to see their team rise up the table — could define their season.

The post Why August could define the New York Red Bulls season appeared first on Last Word On Soccer.