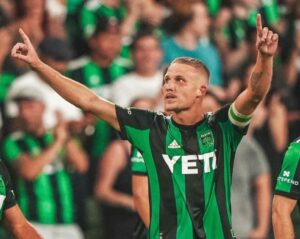 EDITORIAL – Sebastian Driussi was going to be the savior of Austin and finally fire their offense into life! Right? His first assist for the Verde, a precise corner whipped onto the head of Alex Ring, enabled the ATX skipper to open the scoring tonight. So, yes, Driussi matters.

You know what else matters? When Austin score first, Austin win. Almost always. The one game v Sporting Kansas when they were reduced to 10-men aside. Ring was in the middle of things that day, too, being the guy sent to the showers early.

It was Ring who really stole the show in the first 45 minutes tonight. His goal was a textbook example of how to time your run, get in front of your marker on a corner, and snap a header across the box into the far corner. That 36th minutes goal was the icing to his first-half cake. His combative, battling performance was an exercise in sheer pigheadedness. The Finn tracked and tackled everything in a Vancouver jersey, sometimes fairly, sometimes not. He was clearly fired up and determined to lead by example.

Driussi and his fellow attacking DP’s attempted to respond, but everything was just slightly off. Driussi did not look entirely convincing in the center forward spot. Cecilio Dominguez looked off the pace, his passes routinely missing their mark. Dominguez was actually withdrawn on the half-hour. The Paraguayan had been ill last week and didn’t look as though he had fully recovered, something Wolff hinted at after the match.

Diego Fagundez was his typical reliable self, without providing too much of a cutting edge, a whipped shot over the crossbar his most exciting first-half contribution. There were at least green – sorry, Verde – shoots of more attacking creativity and threat. There were moments of exciting link-up play. Something does appear to be developing.

The Whitecaps started the second half the more brightly of the two teams. It took the Canadians just 7 minutes to secure parity. The impeccable Ring misplaced a pass and Stuver was called into action. His save led to a corner, from which, after some goalmouth pinball saw the ball drop to Jake Nerwinski who tucked it home from close range. That goal fired Austin to life and it was largely one-way traffic from the next 20 minutes. Until it wasn’t.

On the 74th minute, the Whitecaps broke with speed and incision. A ball slipped across the face of goal was met at the back post by Brian White and the visitors had an unlikely lead. Austin continued to press, Vancouver continued to counter.

Jon Gallagher, introduced for Dominguez, had two excellent headed sights on goal. Toto flashed a couple of long shots over and wide. Driussi, looking far more comfortable in a wide position in the second half, whipped in several dangerous crosses and continued to be involved in much of what was good offensively.

The question continues to hang out there, though; what could Austin do if they had a true center forward? Coach Josh Wolff even threw central defender Julio Cascante up top in the final few minutes but little came his way. For only the second time this season, the Verde failed to hold on to a lead. Austin looked tired and dispirited and fizzled out as the match ended in a Whitecaps victory. Without a proven striker to lead their line, Austin’s season is in very real danger of going the same way.

Yes, Austin need a center forward. In the meanwhile, though, an offensive understanding does seem to be developing quickly between their 3 DP’s. Sebastian Driussi is settling in quickly. Austin will hope that when he finally makes his appearance in Verde that Moussa Djitte does likewise. Wolff may have a bigger challenge on his hands, now, though. The player’s body language at the end of this Whitecaps victory suggested physical and mental exhaustion.