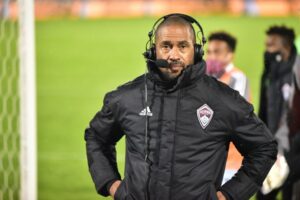 EDITORIAL – Robin Fraser has been the head coach of Colorado Rapids for over a year and a half now. As he’s settled in and his roster has stabilized, he’s started using certain phrases regularly with the media and in team talks. One of those has been “show who we are” or “show who they are.” But what does Robin Fraser mean when he asks his team to show who we are? What does it need to mean for the Rapids to achieve their goals this season?

When Robin Fraser Says Colorado Rapids “Show who we are”

Fraser has used this phrase when talking about playing a game and giving a good performance. I suppose an equivalent soccer cliché could be “express themselves.” Granted, that usually refers to players bringing technical quality and improvisational magic on the ball, ala Lionel Messi. That is not a forte for the Burgundy Boys.

What does “show who we are” really mean?

The Rapids express their best selves with grit, intensity, and outworking the opponent. They press the opposition high up the field. On the ball, their passes are accurate, albeit predictable and safe at times. When they put in a good 90 minute performance, they give the opponent few attacking opportunities.

At their best, they’re one of the toughest teams to play against in the league. Under Fraser, this team has gotten signature wins against Sporting KC, Portland Timbers, and Seattle Sounders. They won back-to-back games last year against the Cascadia teams to make the playoffs; in those games, they outplayed Portland and Seattle, taking away their biggest strengths and exposing their key weaknesses.

Those are textbook examples of the Rapids “showing who they are,” or rather showing what they are capable of.

But, they haven’t always done that. There were stretches of bad performances last year. They gave up three goals in 17 minutes a few weeks ago against Austin FC. These games have themes:

Avoidable defensive mistakes and poor emergency defending lead to goals. The team doesn’t respond well to giving up a goal and concedes in quick succession. They don’t finish their chances, further highlighting that most teams have better (read: more expensive) Designated Players in attacking positions. They drop points in part due to self inflicted wounds and poor effort/execution in key moments.

As a head coach, Fraser is better at most things than Pablo Mastroeni was. If there’s one apparent relative weakness, it’s in motivating his team. Say what you will of Pablo’s teams, they never gave up.

Under Fraser, this is a team that has too often played at less than their collective potential. At their worst, they can drop points to anyone. At their best, they compete with the best teams in this league and regularly beat them.

The Rapids don’t have a match winner anywhere on the field, unlike the MLS big spenders with three DPs. Seattle can have an off day and get bailed out by Raul Ruidiaz in one play. For Colorado to get a result in a game where Seattle plays well, they have to give a 90 minute performance with attention to detail, outworking will, and no mistakes. Give them nothing, take from them everything.

When Robin Fraser asks his team to “show who they are” to the fans, the opponent, and themselves, he’s asking them to be their best selves, punch above their weight, and to reach their potential. Most of that comes down to gumption and mentality. It’s like when Deadpool says “maximum effort” before doing something difficult. Half of why he says it out loud is to convince himself he can do it.

Colorado will be the less talented team on paper in many of their games this season. They’ve already proven that their will (read: maximum effort) can overcome the skill of the elite teams in MLS. If they show themselves and give maximum effort regularly, they will make the playoffs and win a playoff game, probably at home.

If they don’t, they will miss the playoffs and in so doing, show their manager that they’ve failed to become what he already believes them to be.

The post When Robin Fraser Says Colorado Rapids Must “Show who we are” appeared first on Last Word On Soccer.