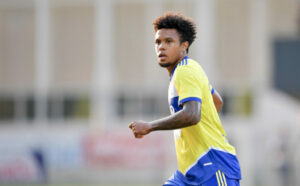 Weston McKennie may only have one season under his belt at Italian giants Juventus, but the American midfielder looks reportedly set to leave the Turin-based club.

Juventus manager Massimiliano Allegri is ‘not convinced’ with McKennie and could sell the midfielder prior to the end of the summer transfer window, Football-Italia reported Tuesday. Aston Villa, Everton and Tottenham are all reportedly interested in acquiring McKennie from the Old Lady, while Bayern Munich has previously shown interest this summer.

McKennie, 22, joined Juventus on a permanent deal with then-Bundesliga club Schalke after originally being acquired on loan. Juventus made his move permanent after paying Schalke €18.5 million and now is aiming to sell him for at least €30 million.

The U.S. men’s national team midfielder scored six goals and delivered three assists in 46 combined appearances for Juventus last season. Juventus did not repeat as Serie A champions or advance past the quarterfinal stage of the UEFA Champions League, but did capture both the Italian Super Cup and Coppa Italia trophies.

McKennie has continued to rise into a top talent in Europe, which has also seen his stock grow with the USMNT. The Texas native helped Gregg Berhalter’s side win the inaugural Concacaf Nations League tournament and in total has scored seven goals in 24 international appearances.

Tottenham are currently not negotiating with Juventus for Weston McKennie on potential swap deal with Moussa Sissoko. Both clubs are not interested.

Juventus will only sell Wes McKennie if they receive “important bids” – more than €25/30m.

Is the Premier League in Weston McKennie’s future?

Aston Villa certainly has the funds to buy McKennie after receiving £100 million from Manchester City for midfielder Jack Grealish this summer. Dean Smith’s side could use a physical midfielder like McKennie to partner with Douglas Luiz in the heart of midfield.

Everton and Tottenham could also use a player like McKennie as both clubs aim to fight for top-six in the Premier League. Rafael Benitez’s Toffees has yet to suffer a loss in all competitions following Tuesday’s 2-1 Carabao Cup win over Huddersfield Town while Nuno Espirito Santo has led Spurs to back-to-back league victories to open the new season.

McKennie did not feature for Juventus in its season opener, a 2-2 draw with Udinese, due to yellow card accumulation from the end of the 2020-21 season. Should a club from England make a serious inquiry about McKennie, they would need to get a deal done by the Aug. 31 deadline.

It is undetermined if Allegri will name McKennie in his squad this weekend as Juventus faces off with Empoli. Should McKennie make the move to England, he would join international teammates Christian Pulisic, Zack Steffen and Josh Sargent in the EPL.