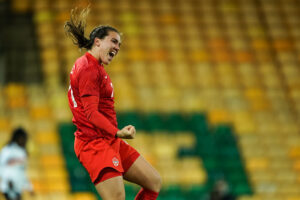 NORWICH, ENG – The CanWNT secured its first win of 2022 beating Germany 1-0 in their second game at the Arnold Clarke Cup at Carrow Road Stadium in Norwich, England.

Vanessa Gilles plays a big role in the CanWNT’s win

Full Game Summary: #CanWNT’s Vanessa Gilles was the player of the game, including scoring the only goal of the game.#IMTEAM had some chances to score but did not capitalize.

The defence and goalkeeping of #ForCanada played very well.#CANvGER | 1-0 | #ArnoldClarkCup

It was Vanessa Gilles’ first international goal scored for the #CanWNT.

The first five minutes of the game were spent mostly in the middle of the pitch and both teams looking for space and openings. Two minutes later Canada, earned its first set-piece a corner kick and off the corner, Vanessa Gilles headed the ball into the back of the net for the early 1-0 lead.

Germany started to press and had two great chances in the 25-minute but Gilles came up big clearing the ball not once but twice out of danger to keep their one-goal lead and the Germans had yet to record a shot on target. They finally got it in the 41-minute but CanWNT goalkeeper Kailen Sheridan came up with her first save of the game.

The fourth official showed two minutes of added time was to be played and after the first half, Canada went into the locker room up a goal.

The CanWNT hangs on

The second half began and again it was Germany dominating in possession looking for the equalizer and it became very tight and in the 52-minute they got a shot on the net but Sheridan again came up with the save. Bev Priestman made her first two changes of the game two minutes later bringing in Deanne Rose and Allysha Chapman.

Germany got another shot on target in the 65-minute this time from Fabienne Donghus but it went right into the hands of Sheridan who was able to make the easy save and retain Canada lead. In the 69-minute, Julia Grosso and Gabrielle Carle came on for Canada.

Things got dangerous for Canada as Germany got another dangerous chance and Sheridan stood tall making a quick leg save to keep the ball out. Canada made its final change in the 77-minute bringing in Sophie Schmidt for Quinn. With 10 minutes Germany kept pressuring Canada but they did a good job of blocking shots in the box.

Four minutes again were added on to 90 minutes of play and Germany was still looking for a late goal to potentially earn a draw. The final whistle blew and Canada had earned their first win of 2022 and the first team to register a win at the Arnold Clark Cup.

The #CanWNT wins for the first time against #IMTEAM since 2016 thanks to an early Vanessa Gilles goal. pic.twitter.com/H8Hjk4wDRn

With the win, Canada is now at the top of the table with four points (the draw came against England) and will face Spain in their final match on Wednesday if they beat Spain they will be the winners of the inaugural event. The match can be seen on TSN at 9:30 am ET Wednesday morning.

The post Vanessa Gilles heads the CanWNT past Germany at the Arnold Clark Cup appeared first on Last Word On Soccer.