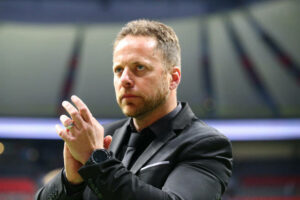 Picture this. You walk into an organization that has no locker room confidence. That is losing touch with it’s fan base. That is at the beginning of a long and substantial rebuild. It is 2019. It’s a Vancouver winter. You are Marc Dos Santos.

Fast forward to present day. You spend all of the money you receive from your teenage superstar. You have had to call three different cities your home base without playing with fans. It’s a struggle to bring in players due to federal restrictions caused by a global pandemic. It is August 27th 2021. You are still Marc Dos Santos.

The news broke at 2:00pm pacific time, Marc Dos Santos and the Vancouver Whitecaps are parting ways. Less than 24 hours after a humiliating 4-3 defeat to the CPL’s Pacific FC in a historic day for British Columbian soccer. The Canadian Championship was a big deal for Dos Santos, as he had eyes on Champions League qualification. Bowing out in the first round in 2019 to CPL side Cavalry also may have something to do with that.

Despite being undefeated in eight games in league play, Vancouver struggled out of the gate. Now, as the MLS schedule hits the two-thirds mark, the Whitecaps find themselves just three points from a playoff spot. A major target in Dos Santos’ “three year plan” was to make the playoffs in 2020 and be competitive in the playoffs in 2021. Missing the playoffs by three points last year absolutely was a massive blow personally for the manager, and faced a harsh reality of failure.

In 77 games as manager, Dos Santos went 22-37-18 with Vancouver. He finished last in the conference, and then ninth out of 12, and finally, was sitting at 10th out of 13 in this year’s table. As tough as all of this sounds, Dos Santos had extraordinary and unique hurdles that very few have ever had to face. Most notably, the Covid 19 pandemic.

Having beaten a strong LA Galaxy side 1-0 in week 2 of the 2020 MLS season, Vancouver expected to keep their good form going the next weekend against Colorado. They would end up having to wait over four months before their next match. MLS is Back provided a bit of a spark for Vancouver, relying on many youngsters that helped them break through in 2020. Following a brief (and disappointing) closed-door Canadian series against Toronto and Montreal, no one knew what would be next, or how it would look.

Portland would be considered the next home base, finishing off the 2020 season sharing Providence Park with the Timbers. And while it seemed inevitable that a similar situation would unfold, it would be in Utah to start off 2021. Having gone 539 days since playing in front of home fans, Dos Santos often said how hard it is on him and his players.

Regardless of the situation however, what matters is the team’s success, no matter the location or circumstances. Dos Santos promised a drastic increase in each year under his tutelage. A promise which inevitably did not come true.

Not all doom and gloom

Despite the negativity coming out over the last 24 hours os so from the online Whitecaps fanbase, Marc Dos Santos has left his successor an excellent platform for success. Having no form of identity, playing style or core, Dos Santos did his best to address each of those areas of concern during his time with the club.

Identity: While Vancouver may not have the natural appeal to elite players such as LA, New York or Miami, Dos Santos took excellent care of one pathway he could control. the club’s youth. Michael Baldisimo, Theo Bair, Thomas Hasal, Patrick Metcalfe, Ryan Raposo. All names young Canadians that Dos Santos let prove their worth to the club and many making cases for youth national team call ups. The “Play The Kids” movement in fall 2020 was paying off, and has left Vancouver enriched with eager youngsters with MLS experience.

Playing style: Despite never getting his desired attacking midfielder DP until just weeks before his departure, Marc Dos Santos never really found constant success in the middle of the field. Instead he looked outwards, starting with the wing backs. Ali Adnan has been a phenomenal servant to the club and has fulfilled the “attacking wing back” role very nicely. Jake Nerwinski never quite fit the bill, and Superdraft pick Javain Brown looks like he has made that spot his own. Then intricate, tricky wingers to fly down the wings and cause problems of the counter attack. Cue Deiber Caicedo and Christian Dajome. And finally a big target man to bully defenders and cause trouble. Lucas Cavallini is that man.

Core: At the start of the 2021 season, only two players had been at the club since Carl Robinson was in charge in 2018, Jake Nerwinski and Russel Teibert. Not much of a core. Now, players such as Ranko Veselinovic, Dajome, Janio Bikel, Christian Gutierrez, all are nearing the end of their second season, and commonly find their way into the starting 11. Players are understanding their roles more so than before, starters, role players, back ups etc. Now it was just a problem or mixing them all together and making it work.

Despite the obvious lack of results, more and more problems crept up during Dos Santos’ 2.5 year tenure. An apparent lack of a permanent formation was a big one. Rotating between a 4-4-2, 3-2-3-1, 3-5-2, and every now and then a 4-3-3. Very little consistency in teams selection and formation was never a good sign, and always kept fans guessing about what version of the team they would see on a given match day.

Front office hardly helped relieve the situation. Just months after getting rid of Bobby Lenarduzzi’s President role, Vancouver and CEO Mark Pannes parted ways, leaving Sporting Director Axel Schuster with practically the same power and responsibilities as Lenarduzzi. Schuster has done a fine job with the tasks, it’s just ashamed that Pannes had to lose his job for Vancouver to recreate practically the same role they vowed to get rid of. An ongoing sexual assault case that has been swept under the rug, and growing frustration amongst the fans with the club owners has left a toxic environment in the offices of BC Place.

For both the 2019 and 2020 seasons, Dos Santos’ was also the figurehead of the scouting department, leaving more responsibilities on an already full plate for the Portuguese manager. Since bringing in January 2021, Nikos Overheul as Director of Recruitment, the signings have been more impactful and successful than previous years.

So even though that not all of the problems came straight from Dos Santos’ management of the club, the pre-existing situation around him didn’t help him out when needed.

With one season under his belt as an MLS assistant coach at LAFC in 2018, and his time with the Whitecaps, Dos Santos is set to land on his feet in no time. A lot of uncontrollable outside factors have casted a shadow over his time in Vancouver, but his soccer IQ and passion for the game is very high. His love for his players, the city and the game was always well documented and never in doubt. So in that aspect alone, Dos Santos will be missed.

The club is now under the interim control of Vanni Sartini, a former assistant coach turned Director of Methodology at the club. Well loved throughout the youth system and first team, Sartini also was the manager of A.S. Mezzana in Italy, helping them find promotion to Serie A.

Dos Santos’ faults have always been spoken about being hand in hand with Covid, injuries, or international call ups. But deep down, a lot of people knew that Dos Santos would never be the manager to guide Vancouver to the next level. He has done a great job of improving the overall quality of the team and raising them up from the dumpster fire that he took over from Robinson in 2019.

While it was an ugly, rainy. embarrassing 4-3 defeat that was the final nail in the coffin, Dos Santos will always be remembered for his passion on the sidelines, emotional after every win, ready for the criticism after a loss. It may not have been meant to be for Dos Santos in Vancouver, but the club definitely is in a better position now to succeed than when he took the job in the first place. Use whichever scale you would like to measure his success in Vancouver.