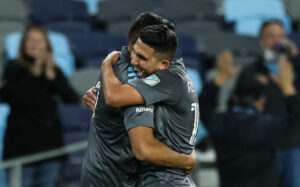 Fresh off of an unconvincing win over CF Montreal, the Vancouver Whitecaps found themselves in another underdog role against a struggling Minnesota United side. Finding themselves without a point through the first four matches, Minnesota needed to get some traction to right Adrian Heath’s ship.

Vancouver seemed a favorable opponent, who lucked their way to a tie for second place in the Western conference before Wednesday’s game. Still no goals from open play, Marc Dos Santos stuck to his guns and marched out a similar 4-4-2 to what Vancouver fans are quickly becoming adjusted to. Bruno Gaspar picked up his first MLS start, replacing Jake Nerwinski at the right back spot. The Portuguese full back was brought in to improve Vancouver’s attacking ability down the right side. And that he did in the first 45.

A rather cagey opening to the match saw neither team really push the envelope going forwards. However Vancouver’s “man in-form” Christian Dajome was gifted a chance in the early goings after a Chase Gasper miss-pass and a pass from below Colombian Deiber Caicedo. But the pressure from a number of swarming Loons caused the ball to sail over the goal. A pair of Cavallini headers were about as close as the Whitecaps would come in the opening 45. I would say the same for Minnesota, but Emanuel Reynoso would have something to say about that.

The Argentinean winger mustered up five shots in the first half alone, twisting and turning and causing all sorts of problems. It was a brilliant battle, watching Reynoso taking on (and inevitably beating) both Gaspar and Nerwinski down the right side. Yet both sides were kept off the score sheet through the first 45 due to a superb performance from both Max Crepeau and Tyler Miller.

The middle of the field opened up a lot more in the second half, with both teams comfortably switching offensive threats. Caio Alexandre was able to find pockets of space and produce the long range passes Whitecaps fans were promised. Jan Gregus and Robin Lod had greased their wheels and produced a number of quality chances. The game was opening up, much to the displeasure of Vancouver. Yet, no team was able to break through — at least, for 72 minutes.

Lod was able to collect the ball out on the right flank, and whipped in a dangerous cross past a seemingly lost Derek Cornelius. Ramon Abila rose up and nodded home his first as a Loon, and the game’s only tally.

Minnesota were able to close up shop, barely allowing any threatening chances from Vancouver in the final 15 minutes, and comfortably saw out the game, securing the team’s first win of 2021.

Last words on Vancouver vs. Minnesota

It was put up or shut up for the Whitecaps. They seemingly chose the latter on Wednesday night. For once, chance creation wasn’t the problem however, it was their finishing. A step in the right direction in some departments, a step backwards in others. Limited squad rotation could come back to haunt this team up against a physical wild card in Sporting Kansas City this Sunday.

For the home side in this one, a sigh of relief was let out around Allianz Field. Adrien Heath is back on his feet once again, but is far from out of the whole that he dug himself into. Another home match against a struggling FC Dallas team is the perfect remedy to bounce a team out of a season opening slump like this one. While it wasn’t a 2020 caliber performance, the better team won on the night in Saint Paul.