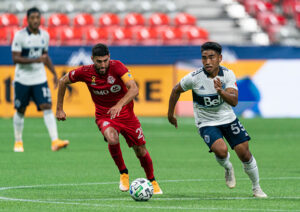 ORLANDO- Toronto FC “hosted” the Vancouver Whitecaps in Orlando’s Exploria stadium. The Whitecaps gave up a late lead just a little less than 10 minutes from time, as Vancouver ties Toronto in a 2-2 draw.

Vancouver ties Toronto: A case of dropped points for the ‘Caps

It was a case of two Canadian teams with opposite opening day stories to tell as Vancouver and Toronto tie. Vancouver scraped through a 1-0 win against Cascadia rivals Portland, while Toronto was dealing with the embarrassment of losing to “little brother” Montreal 4-2. Vancouver showed a tight and compact defense. Toronto left its flood gates wide open.

If this was two years ago, you would’ve thought that the roles should be reversed. I don’t blame you, I would’ve too. Regardless of what happened two years ago, or in last year’s (woeful) Canadian series, both Vancouver and Toronto came into this one riding different opening day waves.

Marc Dos Santos stuck with the same 11 that bested Portland last week, with a versatile 4-4-2. New signings Caio Alexandre and Bruno Gaspar were on the bench due to having less than a week of training. Lucas Cavallini scored the lone goal vs the Timbers, and against a battered Toronto backline, a big performance was expected. Jake Nerwinski notched his 100th start for the club, whose time as a starter may be up given Gaspar’s arrival. Michael Baldisimo and Janio Bikel were the string-pullers in the midfield, with worker bee Christian Dajome applying the press alongside Cavallini.

For Toronto, it’s a slightly different story. Instead of quarantining and Visa issues, the Red’s have been bitten by the injury bug. Jozy Altidore, Alejandro Pozuelo, Achara and more all missing for Toronto. Their lineup was full of a number of youngsters, as well as last-ditch striker Patrick Mullins, as they took to Exploria Stadium against their Canadian rivals.

Against the run of play

Vancouver was notorious for their slow starts in 2020, so keeping a clean sheet against a Champions League caliber Portland was impressive. Seven minutes into this one, however, Toronto erased that goose egg. A ball dangerously floated into the six-yard box troubled Max Crepeau, whose miscommunication with Andy Rose left a wide-open Omar Gonzalez at the back post. Selflessly, he knocked it back into the mix. Homegrown center-back Luke Singh provided the final touch to put it through Nerwinski’s legs to open the scoring.

Vancouver bounced back quite well however and seemed to be the better of the two sides through the first 45. A number of chances, but the Whitecaps seemed to just be missing the final touch to convert on one of their many counter attacks. A strong opening half from Janio Bikel, who went on to lead the team in tackles at the final whistle. An unfortunate display by Vancouver’s back end was the lone tally in the first half, and the sides headed back to the dressing room with a goal between them.

A gutsy effort, but still not enough

Vancouver came out from the tunnel carrying the momentum from the first half. A number of chances on the break left Toronto’s defense bent. Lucas Cavallini left it broken. A strong run into the box from “El Tanque” saw him skip past a number of red shirts before a clumsy challenge from Richie Laryea sent him to the ground and Dajome to the spot. An accurate finish past Alex Bono tied the game and gave Vancouver all the more belief that this was their game to win.

15 minutes later, they proved it.

Christian Gutierrez had continued his fine form from the Portland match down to Orlando, putting up another man-of-the-match-worthy performance. He was able to add another assist to his resume from his whipped free-kick swung dangerously into the box. Ol’ reliable Andy Rose worked his way between Altidore and Gonzalez and headed home his first of the year. An excellent spell lasting about 40 minutes spanning two halves brought Vancouver back and were in the driver’s seat. Nothing seemed to be able to knock them from their perch.

How fitting is it, that the only thing that could knock themselves down, were themselves? 2020 breakout star Michael Baldisimo (more specifically, his face), was on the wrong end of an Andy Rose clearance and sent Johnathan Osorio through on a breakaway with Max Crepeau. Crepeau made the initial save, but the shot trickled and bounced its way over the line at a snail’s pace. Tie game. Seven minutes left. Enter Ryan Raposo.

Having been brought on late as a sub, it was doubtful that Raposo would manage to make a huge impact in this fixture. Yet he managed to find himself through on goal with his first touch of the game in stoppage time with just Bono to beat. His low, the driven effort was tipped wide by Bono, and with that, the final whistle blew.

Vancouver’s first MLS draw in 581 days felt like a bit of a kick in the teeth, given that they gave up a pair of poor goals and arguably played better than they did in their win over the Timbers. When asked if this was one point earned or two points dropped, Marc Dos Santos couldn’t make up his mind:

“There was a moment in the game where I said this will be a good point,” Dos Santos said. “But then we had our moments late in the game. When I spoke with our players after they were upset at not getting the full three points, which is a good sign.”

Vancouver is back in action next Sunday away against the Colorado Rapids who have picked up just one point from six to open up their campaign. The fixture against Toronto did see the debuts of Bruno Gaspar and Caio Alexandre, so it’s probable we could watch them get their first starts. Meanwhile, Toronto face Cruz Azul in back-to-back games in the Champions League, before facing New York Red Bulls in two weeks’ time. A promising sign for Reds fans is that a number of their “jersey seller” players gained some valuable minutes coming back from injuries before their CCL games. Vancouver arguably deserved to win this game, but neither team deserved to lose it either.

The post Vancouver ties Toronto: A case of dropped points for the ‘Caps appeared first on Last Word On Soccer.