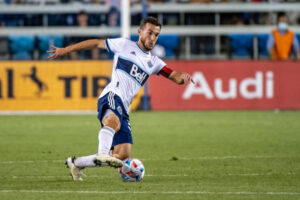 VANCOUVER, BC – In a week like no other for both Vancouver Whitecaps and Real Salt Lake, it’s only fitting that the two met at BC Place on Sunday. The two sides both playing their first game with interim managers. For Real Salt Lake, Pablo Mastroeni took the reigns after Freddy Juarez left the squad for greener pastures in Seattle. A slightly different side of the coin for Vancouver, who fired Marc Dos Santos after Thursday’s loss in the Canadian Championship. Both sides looking for a strong start to impress their new managers caused fireworks in Vancouver.

Real Salt Lake came into BC Place off the back of losing 2-1 to their rivals Colorado on Saturday, blowing their second half lead. Damir Kreilach and Anderson Julio made way for Justin Meram and Pablo Ruiz in the midfield. Ashtone Morgan and Noah Powder slotted in at full backs, with Andrew Putna replacing Zac MacMath in goal. Sunday’s match was the start of three consecutive matches against teams not currently in a playoff spot, an excellent chance to build some consistency and ease Mastroeni into the head coaching gig.

For Vanni Sartini, he also found himself making a number of changes after Vancouver’s embarrassing 4-3 loss to the CPL’s Pacific FC. Bruno Gaspar made his MLS first start since May 22nd, replacing an injured Jake Nerwinski. Florian Jungwirth makes his first start with his new club beside Ranko Veselinovic at centre back. Leo Owusu and Russel Teibert sat beside Janio Bikel in the middle of the field in their return to the starting 11. Ryan Gauld found himself on the wing for the first time in a ‘Cap’s shirt, as he lined up with Brian White and Christian Dajome.

Flood gates opened at BC Place

Despite a slow and balanced first half, Vancouver found themselves with the majority of chances. However, it would be Real Salt Lake’s own undoing that broke the deadlock. A 33rd minute corner swung in by Gauld caused confusion in the six yard box, with Marcelo Silva deflecting the ball into his own goal. That would be the only tally of a chippy half, giving Vancouver their first half time lead in seven games.

It would take just eight minutes into the second half for Vancouver to double their lead. An excellent set of passes between Owusu and Dajome found the Colombian winger in space down the right side. His cross slipped through the hands of Putna to a waiting Brian White at the back post. White’s fourth goal of the year gave Vancouver it’s first two goal lead since July 24.

No more than 10 minutes later, the Whitecaps continued their scoring run with Ryan Gauld netting his second MLS goal in as many games. Excellent midfield build up play lead to Javain Brown floating in a cross to the Scotsman. He headed home Vancouver’s third on the night, all but securing the three points. A Jungwirth header from a Gauld corner in the 69th minute increased Vancouver’s dominance on the scoresheet 4-0, with the German grabbing his first goal as a Whitecap.

A last minute tap in for Anderson Julio erased Vancouver’s clean sheet, but did not much else other than add to his personal collection.

A less than ideal start for Pablo Mastroeni’s time as Salt Lake’s manager, who’s squad is set to host FC Dallas next Saturday. Their weakness on the day was that they simply lost the midfield battle and couldn’t get enough going through the middle. That’s where this game was lost, or won if you’re reading this from Vancouver’s perspective. A suffocating effort by Bikel, Teibert and Owusu really didn’t allow much through the centre of the park. A dream start for Vanni Sartini’s time in charge as the club reached a club record nine games unbeaten in MLS play.