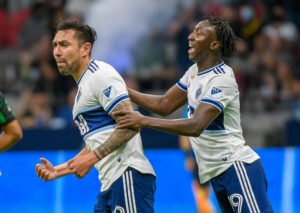 VANCOUVER, BC – Vancouver extends its unbeaten run with a come-from-behind win against Austin FC. The two squads in completely different positions are set up for Sunday’s clash in Vancouver. The Whitecaps found themselves facing Austin FC for the second time in 17 days, after coming from behind down in Texas. Now it’s their turn to play host, with a depleted lineup nonetheless. For Austin, a struggling expansion side with just one win in their last five, facing a team in good form is never what you want to see. Regardless, a cold and rainy Saturday Vancouver afternoon is set up for sparks.

Vancouver walked into BC Place on the back of a club-record nine-game undefeated league run, eager to push it to ten against lowly Austin. Interim coach Vanni Sartini had his hand forced to change the starting eleven due to international fixtures. Erik Godoy replaces Ranko Veselinovic at centre back next to Florian Jungwirth, with Janio Bikel and Bruno Gaspar completing the back four. Michael Baldisimo cracks his first starting 11 since July, sitting beside Russell Teibert and Leo Owusu in the middle of the park. Brian White keeps his place with Lucas Cavallini away with team Canada, with Ryan Gauld and Cristian Dajome on either side of him.

For the visitors, Saturday marked the second of five straight against teams currently outside of a playoff spot. Josh Wolff kept the spine of last week’s team, with Hector Jimenez replacing Zan Kolmanic at right back. Tomas Pochettino filled in for Daniel Pereira next to Alex Ring, and the front four remained unchanged. Former Whitecaps winger Kekuta Manneh started on the bench for Austin.

Despite an even and physical first half, no team was able to break the ice. A handful of half-chances for Austin, as they lead in possession and shots nearing the break. Until, in true Vancouver fashion, Austin found a last-second go-ahead goal. After embarrassing Bruno Gaspar for the duration of the half, Cecilio Dominguez managed to float a ball into a wide-open Sebastian Driussi in the six-yard box. Waltzing was between a number of defenders, the Argentine headed home his second of the campaign. Austin lead heading into the break. Vancouver found itself with work to be done.

On his 50th MLS start, Erik powers home the equalizer.

It would be one of the more unlikely names to level the game for Vancouver in the 70-minute. On his 50th MLS start, Erik Godoy headed home a Dajome cross, beating Nick Lima in the air. His first of the year capped off an impressive 15-minute spell for Vancouver, who hit the bar just a few minutes earlier. A flurry of substitutions for both sides set up an enticing finish to a much livelier second half.

Deiber Caicedo, who had almost singlehandedly sparked BC Place back into life with his second-half performance, took advantage of the occasion. Gauld fancied his luck on Brad Stuver, and while his diving save kept his attempt out, the Colombian substitute was able to put home the rebound in the 83-minute. A deserved goal for probably the unanimous best player on the park for either squad.

Vancouver extends its unbeaten run and managed to hang on despite the ghost of Manneh still haunting the pitch of BC Place. The win sees them climb into a playoff spot with the help of Real Salt Lake and Dallas drawing 1-1. It also marked a club record, going ten consecutive games without a league defeat, a feat deemed nearly impossible at the early stage of the season. This is also their fourth-straight win in MLS, which included a 4-1 win over Real Salt Lake.

As “Stand By Me” rang around BC Place, fans guided their team into the dressing room with optimism and a sense of pride that has been escaping the Vancouver faithful for some time now. A meeting with Cascade rivals and sixth-place holders Portland next Friday has quickly become just that much more important.

For Austin, a bottom-of-the-conference clash with the Houston Dynamo at home is a perfect bounce-back game following a performance where for 45 minutes, they were the better team. A trend going against Vancouver’s, Austin’s steady start has dragged to a near halt. Three points from their last six aren’t going to keep Josh Wolff happy, however, a favourable stretch ahead is hope for a change of direction.