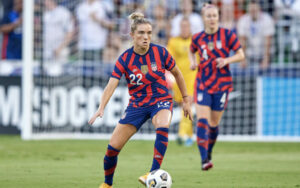 After final months of preparation, the U.S. Women’s National Team has listed its 18 players that will representing the four-time FIFA World Cup winning champions in Tokyo this summer. The Olympics will kick off on July 23, and the USWNT are looking to become the first-ever team to win a World Cup title and an Olympic title in back-to-back years.

On Wednesday morning, the USWNT and head coach Vlatko Andonovski announced the official 18-player roster. There weren’t too many surprises, but a couple players did manage to impress in the last few months to earn a roster spot. Without further ado, here are the 18 players and four alternates going to Tokyo.

The United States has been drawn into Group G, which includes arch-rival Sweden, along with Australia and New Zealand. Sweden knocked out the United States in the quarterfinal in 2016, a stunning result for former head coach Jill Ellis and the team.

“It’s been a long process to get to this point, longer than anyone thought it would be, but we collected a lot of information on the players over the past year and half in trainings, in their club matches and in international games and we’re confident that we’ve selected the team with the best chance for success in Japan,” Andonovski said.

Three takeaways from the USWNT Roster

I have a long-standing history of not being a fan of the USWNT allocation process. No, my reasoning isn’t because of the money. In fact, I’m glad that players who are performing well for the national team get a bit of a bonus. However, the stigma with the allocation list is that the USWNT players that are on it are basically guaranteed call ups. Granted, an Olympic roster is not the usual 23 players, so there’s some whittling down to be done.

However, the allocation process — in my opinion — does hurt the players that perform well and consistently with their clubs. Kristie Mewis benefited in the Challenge Cup last year of great performances and being called up. It’s hard not to take her with how well she competes with the Dash.

But, two names on the Olympic roster stand out for the wrong reasons: Julie Ertz and Tobin Heath. Of course, neither of these players wanted to get injured before the Olympics and during their club seasons. However, when they were injured, other players performed well and gave themselves merit for a call up. You have to wonder if their name got them on the roster.

Heath hasn’t played a club match since late March and is listed as unattached — her rights, along with Christen Press’ league rights, belong to Racing Louisville. Ertz got hurt May, so her injury is more recent.

I want to make it clear that I’m not targeting players. I had the same argument in 2019 when Alex Morgan was performing terribly for her club, the Orlando Pride, and when Megan Rapinoe did not play a single club minute in 2019 until after the World Cup. Blame Jürgen Klinsmann for my strong belief that players who get called on the national team roster should be performing well for their club.

If not, let the ones who are performing well get on the roster — even in a major tournament.

To me, the Olympics is all about letting the kids loose. Christen Press is in incredible form, so if she’s not starting up top over Carli Lloyd then there is a serious problem. Also, Kelley O’Hara has an issue with staying healthy. Emily Sonnett, on the other hand, is consistently healthy.

The United States has a mixture of veteran and youth. However, all players on this roster — aside from Kristie Mewis — were on that 2019 World Cup winning roster. It’s time to give players like Lindsey Horan, Rose Lavelle, Sam Mewis and Sonnett the reins. Let the kids play.

The United States have a pretty easy group in the Olympics. Australia hasn’t been in great form and, while New Zealand is a team that is chock full of talent, they just aren’t on the same level as the United States. Sweden is an interesting story. They are a team that can really frazzle the USWNT — and their game plan will to do just that.

It’s likely that the USWNT will make the knockout rounds — although, as the Euros have taught us recently, you can’t predict anything in soccer — but the road will get tough. There are some incredibly talented teams at the Olympics. Brazil is fired up and Marta will want some hardware as her career looks to come to a close. Japan is facing an incredible amount of pressure, being the host nation. Canada has been the back-seat team to the USWNT for years, and Christine Sinclair will want to extend her international goal-scoring record.

All in all, the United States are going to face some tough teams, in their group stage and if they make the knockout rounds. These Olympics might be the most competitive we have ever seen.