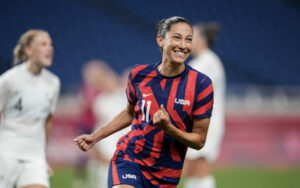 NWSL expansion side Angel City FC still has plenty of roster moves to make over the next few months, but made a major splash with its first transaction on Monday.

U.S. women’s national team star Christen Press was acquired by Angel City FC on Monday in a trade with Racing Louisville. The club acquired her rights in exchange for Angel City’s first round pick (No. 2 overall) in the 2022 NWSL Draft, $75,000 in allocation money and roster protection from the expansion side in the upcoming expansion draft.

Racing Louisville had previously acquired her rights during the 2020 expansion draft from fellow NWSL side Utah Royals FC.

“It’s a dream come true to play for ACFC and represent my hometown, my friends and family, and our fans,” Press said in a statement.

A Los Angeles, California native, Press most recently played at club level for Manchester United in the Women’s Super League during the 2020-21 season. The 32-year-old scored four goals and recorded one assist in 17 matches played before returning to the United States ahead of the USWNT’s involvement in the rescheduled Tokyo Olympics.

Press scored one goal and added one assist for Vlatko Andonovski’s squad in Japan, helping the Americans finish with the bronze medal. Her goal against New Zealand in group stage play was her first in Olympic play.

We can’t wait to see you reppin’ our crest & colors, @ChristenPress

Press has appeared in 88 NWSL matches to date including three playoff appearances, scoring 46 goals and tallying 10 assists. She will unite with Angel City FC head coach Freya Coombe, who was hired as the first head coach in club history earlier this summer.

“I think everyone has been watching the story of Angel City unfold and I have been very impressed with the direction of the club and the core values upon which it is built,” Coombe said. “When the opportunity to connect with Eni and the team arose, I knew I had to explore it. Leaving NJ/NY Gotham was not an easy decision, but the chance to join ACFC as the head coach of a new team was something I could not pass up.”

Coombe will finish out the 2021 NWSL season with Gotham.