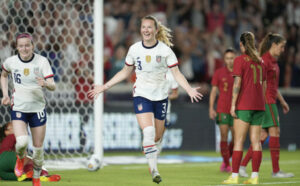 The U.S. women’s national team gave fans and reporters something to talk about on Thursday night. Kicking off the Summer Series, the USWNT took on Portugal, the only European group to feature in the tournament. These matches are serving as send-off games for the United States, who will head to Tokyo later this summer for the Olympics.

Portugal put the United States to the test, and goalkeeper Ines Pereira put up nine saves — using her feet for a couple of denied attempts from the U.S.

Portugal only took one shot on goal, which landed in the hands of goalkeeper Alyssa Naeher. However, Jessica Silva and Francisca Nazareth led the attack for Portugal, giving the red-shirted players a good look on the attack.

It almost seemed like the match would end in a gritty scoreless draw, which would have been a dream for Portugal. However, on a set piece corner, Portugal neglected to cover 6’0 midfielder Sam Mewis. She didn’t have to do much; Mewis stayed in her spot and sent the ball past Pereira.

With Julie Ertz out on injury, the United States has been tinkering with the formation personnel changes. Head coach Vlatko Andonovski moved Lindsey Horan into the No. 6 role, calling her a “monster on the field” after the game. Alex Morgan, Megan Rapinoe and Christen Press took the front three attacking spots.

After the match, Horan spoke about how “tense” camp is with an Olympic roster soon to be named.

“I think coming into the camps with the USWNT, it’s always tense, it’s always a lot of pressure,” Horan stated. “It’s always uncomfortable. I think that’s why this national team is so good, and that’s why the competition is so high. Each camp, you’re exhausted at the end. You’re playing with the best players in the world and you’re getting better every day. You have three quality games like we’re getting. A roster is being named after this camp, but nothing has changed in this. It’s the same mindset in every single camp.”

Goooooooal, #USWNT! Sam Mewis on the corner knocks it home for the U.S.! #USAvPOR | 1-0 pic.twitter.com/sZuDty6Kms

Three Takeaways from USWNT vs. Portugal

What a freaking save from goalkeeper Ines Pereira on Press, my goodness.#USAvPOR | 0-0 pic.twitter.com/xkZBl1izOr

The United States will take on Jamaica late on Sunday night, at 10 PM EST. Earlier in the day, Portugal will take on Nigeria in their last match of the Summer Series, as European teams are only allowed to play two games in this international window. Nigeria will then take on the United States last, on June 16.

Sunday’s matches will once again be held at BBVA Stadium.