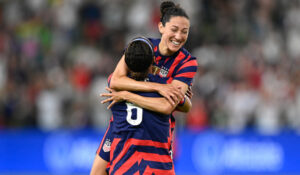 Two stoppage time goals lifted the U.S. women’s national team over Nigeria in a close match on Wednesday night to close out the Summer Series. Christen Press scored the first-ever goal in Q2 Stadium, home of Austin FC, in first-half stoppage time. Lynn Williams, only five minutes after entering the match as a substitute, sealed the USWNT victory with a second-half stoppage time goal.

Naeher was forced to make a save and a couple stops against the Nigerians. Meanwhile, Nigerian goalkeeper Tochukwu Oluehi put on a clinic, making four saves, including one spectacular second-half save against Press in the second half.

The U.S. win comes at a time where head coach Vlatko Andonovski is filling out his final 18-player roster for the Summer Olympics in Tokyo. Williams certainly made a statement with her goal, as she is fighting for a forward spot. Meanwhile, in the second Summer Series game against Jamaica, there was a goalkeeper switch as Adriana Franch took the spot between the sticks, giving Andonovski a different view of goalkeeping.

There are still questions surrounding USWNT roster spots, though. Julie Ertz is recovering from an injury and there is no timetable to if she’ll be ready for Tokyo. Tobin Heath, who hasn’t played a club match since at least April, has been training with the team during the Summer Series, but did not feature in any matches. Meanwhile, against Jamaica, Rose Lavelle rolled her ankle and left the game. She did not play against Nigeria.

Nigeria will not be heading to the Olympics. Zambia will be representing the Confederation of African Football.

Three Takeaways from USWNT vs. Nigeria

Last goal of the match goes to Lynn Williams, who skates past Tochukwu Oluehi.#USAvNGA | 2-0 pic.twitter.com/Mqv55GLsLk

Before the team heads to Tokyo, the USWNT have a few more matches to get final preparations ready. On July 1 and 5, the team will face Mexico in East Hartford, Connecticut. Mexico will not  be heading to Tokyo, as Canada was the second Concacaf nation to qualify for the Olympics.

But first, Andonovski has a final roster to name.