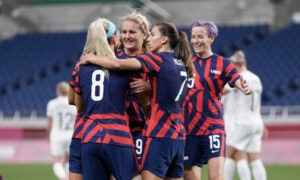 In the last slew of NWSL matches, the Chicago Red Stars have been known as the “own goal team.” A couple Red Stars players are on the U.S. women’s national team roster for the Olympics, so the energy might have carried over. The USWNT topped New Zealand in the second round of group stage matches, 6-1. Two of those goals came from New Zealand on own goal tallies.

However, it was Rose Lavelle that struck first. The Cincinnati, Ohio, native took nine minutes to get on the board. After an assist from Tobin Heath which was gently tapped, Lavelle, on a slanted angle, put the ball past Kiwis goalkeeper Anna Leat.

To follow it up, on her 100th international appearance, Lindsey Horan tallied the second goal in the 45th minute. The goal came right before the halftime whistle, blowing away any confidence from New Zealand.

Rose to the occasion

The first own goal came in the 63rd minute. Abby Erceg, defender for the North Carolina Courage, put the ball in her own net. The final three goals came within in the last 13 minutes of action. Christen Press scored only 12 minutes after entering the match. Then, Alex Morgan, another substitute, scored in the 88th minute. The final own goal came from C.J. Bott in the 93rd minute.

New Zealand did get on the board in the 72nd minute, courtesy of Betsy Hassett. On a defensive error from Abby Dahlkemper, New Zealand took advantage. However, the goal being scored wasn’t enough to mount a comeback for the Kiwis.

Did you know: @LindseyHoran is just the 7th player in #USWNT history to score in her 100th cap.

A look at her journey to

What’s Next for the USWNT and Group G?

The United States sits in second place in Group G. Sweden earned a 4-2 victory over Australia earlier today. The USWNT and Australia will face off in the final group stage match on Tuesday. Meanwhile, New Zealand and Sweden will face off, with Sweden looking to top Group G. They will do so with a win or a draw.

Goals at world championships? @alexmorgan13 knows a thing or two about that

The post USWNT bounce back from Sweden loss to top New Zealand, 6-1 appeared first on Last Word On Soccer.