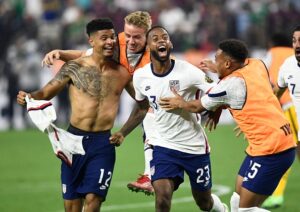 In the first half, the USMNT had the best of chances, as Paul Arriola was played in after a turnover that the USMNT induced on the press. Arriola opted for his right foot instead of his left, and placed it off the post keeping the match scoreless.

While Mexico had many chances, none of them were near as clear-cut as the USMNT. The USMNT didn’t dominate possession, but they were able to create the most cut chances. Arriola, Zardes, Hoppe and co. had their chances but Miles Robinson got on the end of USA free-kick and gave USMNT the gold cup victory.