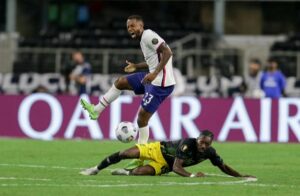 PREVIEW – FIFA World Cup qualifying is back and that includes some United States Men’s National Team action. The USMNT begins its October slate on Thursday against Jamaica at Q2 Stadium in Austin, Texas. This will be the first of three USA matches at the three new MLS venues with the next home match on Oct. 13 taking place at Lower.com Field in Columbus, Ohio. The following home match on Nov. 12 against Mexico will be played at TQL Stadium in Cincinnati.

The United States started its 2022 World Cup qualifying campaign with two draws at El Salvador and in Nashville against Canada in rather uninspiring performances. The Americans concluded the September stretch with an emphatic 4-1 win in Honduras thanks to the storybook debut from Ricardo Pepi, who scored a goal off the bench to ignite a USMNT rally to three points.

This month, the United States will play two home matches with many pundits agreeing that winning all your home games being a key to qualifying for the World Cup. The first home match against Canada at Nissan Stadium left a lot to be desired for USA fans. A victory in Austin against the Reggae Boyz could be the beginning of a strong run towards Qatar.

Manager Gregg Berhalter’s squad is packed with Zack Steffen, Weston McKennie, Sergino Dest, and Ricardo Pepi leading the squad into this international break. Stars like Christian Pulisic and Gio Reyna are missing from the roster. MLS regulars like Walker Zimmerman and Gyasi Zardes will look to fill the gaps during this important stretch.

Jamaica’s form must turn around this month

Jamaica could not have had a worse start to World Cup qualifying. The Reggae Boyz sit in last place in the CONCACAF octagonal after losses to Mexico and Panama with a draw in Costa Rica closing out a disappointing September. Jamaica was seen as a dark horse contender to make its first World Cup since 1998 with a strong squad and recent success in the ConcacafGold Cup propelling its rise in the region.

Jamaica will play two matches on the road against the USA and Honduras with a home match in Kingston against Canada sandwiched in between its two road trips. Points are crucial to keep the Reggae Boyz chances of qualification high for the next World Cup. The squad will be missing its top attackers Michail Antonio and Leon Bailey. Manager Theodore Whitmore will likely look to QPR striker Andre Gray to kickstart the offense in these matches.