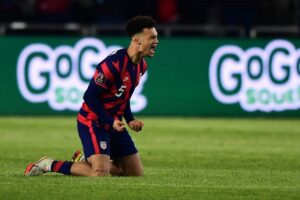 COLUMBUS – Despite drawing the first meeting between the two, El Salvador needed 3 points more than the USMNT this time around. With the USMNT in 2nd, and El Salvador in 7th, a loss for El Salvador would feel like Qatar is out of reach. Below freezing temperatures, flurries of snow, and the implementation of VAR for Concacaf are just three of the big changes from the 0–0 draw when the two sides met in San Salvador. Antonee Robinson had something to say about that.

Christian Pulisic, Sergino Dest, Weston McKennie, and Tyler Adams had never played a single minute together for the USMNT, until kickoff, and that surely put a smile on all USMNT fans faces.

El Salvador had the first flurry of chances with a cross into a dangerous area that was deflected away, until a shot from distance was also blocked. It was a solid spell of defense. Jesus Ferreira had two massive chances missed in the first 20 minutes. The biggest from a header by Tim Weah that leaked to the far post and Ferreira flicked it over the bar.

El Salvador was content in sitting back most of the first 25 minutes or so, but some real end to end play so Alex Roldan, brother of USMNTs Christian Roldan, with an open look at goal from the right side of the box that he blistered wide.

The first half came to an end in the same fashion it was the majority of the time. USA was dominant in possession but unable to pick the lock of El Salvador’s defense.

No substitutions at the half for either side, which came as a surprise especially for the USA, as it seemed Pepi could’ve created a different outcome on some of the chances Ferreira was getting.

A brilliant piece of resilience from Weah to keep possession in the final 3rd and fire a shot that was saved by Mario Gonzalez, but popped up into the middle of the box, Ferreira played a nice header over to Antonee Robinson who slotted it home. 1-0. Collective sigh of relief. The U.S., playing with a new found confidence forced Gonzalez into another brilliant save after an effort from Yunus Musah.

Gregg’s first substitution of the night came in the 64th minute, as Brenden Aaronson came on for Christian Pulisic. Pulisic was quiet tonight, so it’s not the worst idea in the world to keep him fresh. He should be back for the crucial match against Canada.

Two more substitutions in the 72nd minute after a spell where not much occurred on the chances front. Gyasi Zardes came on for Ferreira, and Jordan Morris for Weah.

After the Robinson goal, the second half was a very hunkered down, sloppy game from both sides. Neither really had any goal scoring opportunities. Rivas had a free header in the box that went wide, and provided some sense of danger late.

El Salvador did a fine job making the game ugly and uneasy for the U.S., but amidst the unrest, the full time whistle blew on a 1-0 victory.

The U.S. finished the first half without any goals for the 7th time of the 9 qualifiers played. 10 of the 12 goals the USA have scored have come in the 2nd half. If the USA can find ways to be clinical in both halves, there is no telling what they can become.

The trio in the midfield of MMA, also known as Musah, McKennie, Adams, proved again why this midfield has the potential to be a force to be reckoned with. McKennie and Musah were creative all night and Adams was rock solid in helping out the defense. Awesome stuff from them.

As the U.S. hung onto their 1-0 win, Weston McKennie and Sergino Dest came up limping within the last 5 minutes. If those two aren’t ready to go Sunday, three points may be harder to come by in Canada.