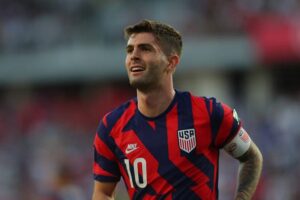 ORLANDO – The U.S. Men’s National Team might not have qualified on Sunday night for the FIFA World Cup, but they put themselves in a good position to do so with a 5-1 win over Panama. Held at Exploria Stadium in Orlando, the U.S. welcomed a crowd of 25,022 fans to have strong home field advantage.

The USMNT scored early and kept up their dominance on the offensive and defensive side of the ball. The three points sets up the United States for a big qualifier against Costa Rica on Wednesday. Canada punched their ticket to the World Cup — for the first time since 1986 and only the second time ever — earlier on Sunday with a 4-0 win against Jamaica.

Costa Rica, on the other hand, picked up a big road win against El Salvador, continuing their impressive and dangerous Concacaf form. Costa Rica began qualification slow, but picked up speed. Right now, the Ticos have stayed unbeaten in the last six qualifiers.

With the Costa Rica win, they won’t qualify tonight, but the US take the lead with Christian Pulisic’s penalty.#USAvPAN | 1-0 | #CWCQ pic.twitter.com/hAH1yIwl1c

Christian Pulisic scored the match’s first goal in the 17th minute off a penalty kick. After some initial confusion on who would take the kick — Jesús Ferreria originally stood over the ball, with Paul Arriola, then handed the ball to Pulisic — Pulisic buried it past Panama goalkeeper Luis Mejía.

The penalty was awarded after a handball in the box, and also contact to Walker Zimmerman’s face and neck area from Aníbal Godoy. The two are teammates at Nashville SC.

Paul Arriola smashes the header to double the U.S. lead! It’s a dream start for the United States after a nervy first 10 minutes.#USAvPAN | 2-0 | #CWCQ pic.twitter.com/tvu69DFvRJ

It wasn’t long after that the United States began piling on the goals. In the 23rd minute, Paul Arriola found the back of the net on a leaping header. Pulisic originated the play, but received a hard tackle and went to the ground. Head referee Iván Barton of El Salvador issued the call to play on. Antonee “Jedi” Robinson picked up the ball and crossed it, finding the head of Arriola.

Four minutes later, Jesús Ferreria scored his third U.S. goal to give the USMNT the 3-0 lead in Orlando. Ferreria picked up the rebound off an Arriola shot inside the box, staying onside, and fired it past Mejía.

Jesús Ferreria with the goal to make it three-nothing! How high will the U.S. run up the goal differential before Costa Rica? #USAvPAN | 3-0 | #CWCQ pic.twitter.com/ViDcGTRSWC

Pulisic slotted home another penalty in first-half stoppage time. Godoy was called for his second foul to give up a penalty after jumping on Miles Robinson. Pulisic stepped up to the spot and fired to his right. Mejía guessed correctly, but Pulisic put too much speed on the ball and got it past the Unión Española goalkeeper.

Pulisic completed his hat-trick in the 65th minute with a dance in the attacking area and shot past Mejía. Antonee “Jedi” Robinson fed Pulisic with the pass, who twisted and turned through the Panama defense.

Panama got a consolation goal from Godoy in the 86th minute, after Aaron Long committed a foul that set up a free kick.

The U.S. have a huge match on Wednesday in Costa Rica. They will qualify with a win or a draw. If the United States would lose to Costa Rica, they would still advance on goal differential, unless Costa Rica were to score seven goals. That match will air at 9:05 p.m. on Paramount+.