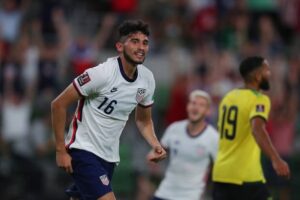 AUSTIN – The USMNT were missing several key players for their latest World Cup Qualifying match, including arguably their most influential in Christian Pulisic. Jamaica were in a similar boat. They, too, were missing arguably their most important attacker, another highly regarded EPL player, Mikel Antonio. Despite both teams’ respective roster challenges, the USMNT were expected to come out on top versus a Jamaica team with zero points from their first 3 WCQ games. America delivered – in the end behind a Ricardo Pepi brace.

The Reggae Boyz started the match extremely compact, forcing the U.S. to play everything wide. Accordingly, the verticality that Greg Berhalter is so fond of talking about was hardly in evidence. Playing through the wingers or overlapping fullbacks would’ve been fine if only there was an end product. Sadly, the delivery from either flank matched the decision-making; poor.

Finally, a little vertical play did click, and Paul Arriola was in behind the Jamaican defense. A desperate tackle by the last defender was adjudged by Grenadian referee Reon Radix to be both outside the box and worthy of only a yellow card. The Austin crowd weren’t happy. USA didn’t do much to improve their mood. The Caribbean opposition continued to present a stubborn rearguard, but also sprang forward dangerously on a few occasions. Arguably, the best sights on goal in the first half were Jamaican.

Just after the half-hour mark, and another test of the officiating. Arriola, this time the provider, slipped Brendan Aaronson in behind the Jamaican defense. Another last-ditch sliding tackle appeared to connect with the ball first, but wiped out the U.S. forward in the process. The ref considered his options, eventually calling a free-kick just outside the box and flashing a yellow card at Damion Lowe. The decision begged the question, if it was a good tackle why was it a yellow card? And if it was a bad tackle, how was it not a red card?

In the second half, the USMNT quickly put to bed any need for further debate by opening the scoring just 4 minutes in. Sergio Dest delivered a perfectly weighted right-wing cross onto the head of man-of-the-moment Ricardo Pepi. The supporter’s section at Q2 Stadium were cheering, rather than groaning, as the FC Dallas forwards header found the back of the net.

Dest and Aaronson continued to be involved in much of what was good as America surged forward time and again. Westin McKennie grew in confidence and influence, too, drawing a great near-post save from keeper Andre Blake after his driving run had taken him into the box. On 62 minutes, the U.S. got their just desserts. Aaronson on the left arrowed a ball into the box, and Pepi slid in to meet it.

Feel free to watch this as many times as you need. It’s pure art. pic.twitter.com/vaBFBnuDXc

Jamaica all but collapsed in on themselves now, with forays into the U.S. half increasingly rare. The home team had to be on their toes on a couple of occasions when play unexpectedly reversed, but the visitors looked largely tired and, without an attacking focal point, devoid of any real threat.

The U.S. continued to create good opportunities, particularly after they began to sub in fresh legs. It’s never a bad thing when you can pull attackers the quality of Tim Weah and Gyasi Zardes off the bench. Zardes had a guilt-edge opportunity to extend the USMNT’s lead as he stretched to connect with Weah’s drilled cross ball. The Crew striker was a hair away from making it 3-0.

Zardes surely thought he had added to the home team’s tally when his scuffed effort from close range squeezed past Blake. The Jamaican keeper fell backwards quickly enough to scramble the ball to safety as it threatened to creep over the goal line.

The USMNT ran out worthy 2-0 winners behind a Ricardo Pepi brace following a much improved second-half performance in an important World Cup Qualifying match. Austin delivered on the night, and so did the team, eventually.