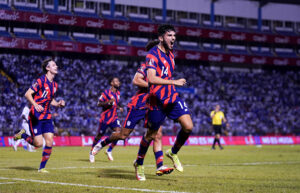 San Pedro Sula, Honduras – The USMNT rode a brilliant final 15 minutes past Honduras to give them their first win in the 2022 World Cup Qualifying Campaign. Ricardo Pepi made his debut and was involved in all four goals the USMNT scored in that wild second-half comeback. The 4-1 win gives the USMNT five points and has them sitting in an auto-qualifying place after the first CONCACAF World Cup Qualifying window.

“ALL ABOARD!” Gregg Berhalter shouts. Yes, that’s the last call for the Ricardo Pepi “hype train” because it’s on its way out. Not just out of Texas, or North America, the hype is on its way out of the stratosphere. In the span of a month, Pepi was named an all-star, named the all-star game MVP, made his national team selection as a dual-national, was called into the USMNT camp for World Cup Qualifying, was handed a start in Honduras, and delivered the performance as the USMNT no.9 fans have been pining for since the days of a healthy Jozy.

“I thought he did a great job,” Berhalter said. “Worked tirelessly. Competed against physical center backs. Scored a really good goal. Overall had a strong performance, for an 18-year-old, it’s really impressive what he did.”

The first half was dismal by the way. Berhalter seemingly set the team up for failure in the 5-2-3 or 3-4-3 or whatever you want to call that jumbled mess of a formation. Tyler Adams was a wingback, James Sands played as a dual pivot in the middle with Kellyn Acosta, and George Bello was practically playing as a left-winger. Oh and don’t forget Josh Sargent running around aimlessly up top not knowing when and where to press as a right-winger.

Honduras scored, the Olimpico went nuts, and then for the final 15 minutes of the first half, the USMNT looked down and out with slumpy shoulders and all. It felt like Costa Rica from 2016, the match that got Jurgen Klinsman fired…but Berhalter rallied the troops at the half, made three crucial substitutions, and off they were, looking for a way out of the mess they created in the first half.

Turning of the Tides

When Antonee Robinson volleyed the rebounded shot into the net just 3 minutes into the second half, he reset the game state, allowing for a more open and free-flowing second half, something that would benefit the USMNT. Honduras was likely prepared to bunker and counter at everything the US would throw at them over the final twenty minutes of the match. But that early goal forced them to go chase and regain the lead, which led to the complete exhaustion and inability to defend late in the match that ballooned the scoreline to what it ended up being.

ANTONEE ROBINSON WITH THE EQUALIZER

Ricardo Pepi though had a hand in it all. He was what helped turn the tide. Yes, Brendan Aaronson, Antonee Robinson, and co. were lightning rods. We can also talk about Gregg nailing absolutely every single substitution to perfection for the umpteenth time this summer at another point. Right now it’s all about Pepi.

For an 18-year-old to be so perfectly involved in every single goal was incredible. He played a role in the first, which was still left all for Robinson to do himself. He then scored the winner, just seconds after being dumped to the ground. But he gets back up, finds and identifies the gaps in the center back on the run for a cross coming in. He jumps early and wins the ball high in the air despite the trailing center back beating him to the ball positionally. A perfectly placed and powered header gave the USMNT the lead.

Amazing: 18-Year-Old Ricardo Pepi heads US into lead in Honduras. El Paso-born striker chose to play for US instead of Mexico because “country gave me and my family a home and endless possibilities to achieve my dreams” All that’s good about this nation

Then on the assist, at full speed he recognizes the trailing run from Aaronson, waits for the defender to get in front of him to block a shot, then cuts the ball back with the perfect weight and angle behind the secondary defender, laying it off to Aaronson to smash home. He did it all at full speed, in the most crucial circumstances in his career. It was an incredible sight to see.

Last call for the Ricardo Pepi hype train, because it’s about to leave the station…

RICARDO PEPI REALLY DID IT!!!! pic.twitter.com/NTJM1X9w5t