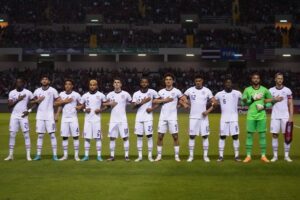 San José – The United States Men’s National Team are headed to the 2022 World Cup in Qatar. The USMNT came into Wednesday’s match at Costa Rica three points ahead of the Ticos with a heavy lead on goal difference. Qualification was a foregone conclusion as the Yanks needed a win, tie, or a loss of less than six goals to qualify.

USMNT Qualify for 2022 World Cup in Loss at Costa Rica

Gregg Berhalter’s lineup clearly showed that he was going for a result. DeAndre Yedlin and Tim Weah started coming back from yellow card accumulation. Other than Ricardo Pepi and perhaps Kellyn Acosta, the first choice lineup started.

Costa Rica manager Luis Fernando Suárez rotated his squad heavily. Only one of the nine players on yellow card accumulation watch (Jewisson Bennette) started. Yellow card accumulation does carry over to the intercontinental playoff. Suárez pragmatically prepared to have his best available team for that match.

The first half saw a number of looks on goal from both sides, though many of the saves were routine. The best chance came in the eighth minute. Miles Robinson delivered a half volley in space on a corner. Goalkeeper Keylor Navas took the sting off the shot but bobbled it in front of the goal line before collecting it.

Despite a scoreless first half, the young Costa Rican players had plenty of energy. They pressed well and had a good mentality despite the circumstances. The back line made life difficult from Christian Pulisic, fouling him on more than one occasion.

Juan Pablo Vargas made it 1-0 in the 51st minute. He beat Walker Zimmerman to the ball in the air on a corner, heading the ball to the back post and past Zack Steffen. Anthony Contreras made it 2-0 eight minutes later. Off a free kick, Steffen was unable to collect the ball in the air. He made the save on Bennette’s rebound shot. The ball bounced to the edge of the box but was put back in. Contreras scored first time in space, running to the corner flag to celebrate as the home side’s bench surrounded him.

The Americans calmed down after that with Berhalter making three substitutions. Giovanni Reyna helped create attacks in the final half hour, but were unable to score as the Ticos emergency defending was good. They possessed the ball more and played out of the back, almost to waste time. The match ended 2-0. With results elsewhere in Concacaf, the USMNT finished third in the octagonal, beating Costa Rica on goal difference (11-5).

Set pieces: In typical, USMNT road games in CWCQ, the best chances came on set pieces and in transition. The best chance for the U.S. came on a corner in the first half. Costa Rica’s two goals were on restarts as well. The Americans killed the game from the run of play, especially after the first goal.

Baby Ticos: The B Team did good. They kept up their energy and did not play scared. Ultimately, they got a win but it was not enough. Still, several individuals especially Contreras had good performances to build on going into the playoff.

Righting the wrong: The most important thing was the USMNT to qualify for the World Cup. How they went about it in this competition and this game were secondary. The ghosts of Couva have been put to rest. The United States Men’s National Team are through to the World Cup Final!

The post USMNT Qualify for 2022 World Cup in Loss at Costa Rica appeared first on Last Word On Soccer.