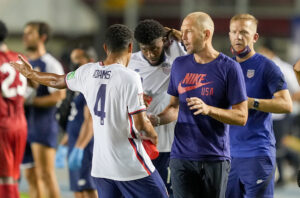 Editorial – As expected, the sky is falling after a USMNT road loss in World Cup Qualifying. Sunday’s loss in Panama City certainly sent a few people over the edge in terms of calling for more of whatever they want. Is it a better-rotated squad? Is it fewer MLS players? Is it more heart and bravery on the field?

Let’s take a look at the big picture, and then see which is rational.

You don’t need to panic about the USMNT…yet

The USMNT sits in 2nd place in the CONCACAF World Cup Qualifying Standings, with 8 points and a +4 goal differential. Sure it’s after five games but, that’s a 1.6 ppg rate. Under the old method, “The Hex” (10 games), 1.6 over 10 games is an automatic qualifier for the World Cup every single cycle since 2006. Only in 2010 did two teams have 16 points, and they both qualified. The “Inter-Continental Playoff” team since 2006 has had a PPG of 1.3, 1.6, 1.1, and 1.2. So, at the moment, the USMNT is sitting in a pretty good spot. So why the freak outs? First, let’s just discuss the performance of the 16 players who stepped on the field in Panama City on Sunday.

It was not pretty, that’s for sure. Winning in CONCACAF rarely is, however. Usually, what wins in CONCACAF is a level of bravery and guts, especially when you are on the road. One of the biggest frustrations was the response after going down a goal. They went slumpy-shouldered and panicked and were too afraid to move off the ball. It was a lazy performance. What happened in the second half of the match against Honduras? Well, they got the ball forward, and when they had a chance to score they put it on target.

The USMNT went the entire match without putting a shot on target. There was a massive disconnect from the midfield to the attack. Nobody was checking back to receive the ball; they just made a half-hearted run and expected the ball to be played. Sure, verticality is what you want, but it can’t be verticality for the sake of verticality. The option to make that play has to be present, and it wasn’t.

One of the most common statements about soccer is that the run is what makes the pass. If there are no runs off the ball happening, people trying to find pockets of space, then the passes aren’t going to be there. The effort was low, and the heart was nonexistent that night. That certainly can be lambasted. That is a fair expectation to have of a team, especially a national team. But some expectations are over the top. So let’s discuss those.

Translation: Winning on the road in CONCACAF is hard.

The USMNT has 4 points on the road already, and a plus three-goal differential. They’ve only allowed two goals on the road as well. Teams in CONCACAF at home are not going to sit back with the game level or losing. They’re going to go at the opponent. Mexico was lucky to get a draw at Panama earlier in the cycle. It’s just outlandish to think that the USMNT should win every road match in CONCACAF when no team has ever come close to doing that. The USMNT finished first in the Qualifying standings every cycle except for 2018, and they still had as many losses as wins on the road during that span. Let’s get a grip and some realistic expectations.

I won’t point direct fingers but when drafting this article I saw the dumbest take on Twitter: “The USMNT is too talented to only have 8 points from 5 games.” There is a lot of potential talent in this USMNT squad that Gregg Berhalter is calling in. For some reason, we assume that a squad that largely has players under the age of 25 that play at big European clubs should just be able to walk all over Central American sides that don’t have that. They may not have players at Chelsea, Juventus and across the Bundesliga, but they have experience in club competitions, in their own leagues and within the region.

Panama has 10 players on their roster playing in European leagues, not to mention another eight that play in South America. They have talent too. Older, more experienced talent.

Winning on the road in CONCACAF is hard, so let’s stop freaking out over singular results. The USMNT has an opportunity to get to 11 points on Wednesday, which puts them at a 1.83 PPG average. That rate would give them at least 25 points, and very likely send them to the World Cup. Patience and perspective, folks.