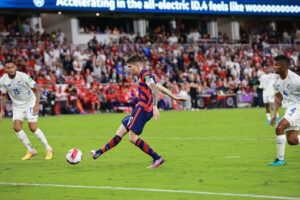 ORLANDO – Last Sunday, the United States Men’s National Team got one giant step closer to qualifying for the 2022 Qatar World Cup. They defeated Panama 5-1 at Exploria Stadium. Christian Pulisic scored a hattrick. They were up 3-0 inside a half hour. All the demons that have haunted them during qualifying were vanquished, or nearly are.

This was a crucial game for both teams. With both getting a draw on Thursday and Costa Rica winning their first two games of the window, both teams were at risk of finishing fifth in the octagonal. The home side wasted no time with an electric crowd urging them on.

Walker Zimmerman earned a penalty, getting throat slammed by captain Anibal Godoy. Christian Pulisic scored the penalty, after Jesus Ferreira picked up the ball as a decoy. Ten minutes later, he and Paul Arriola had scored as well. Another penalty and a great individual effort and Pulisic had a hattrick on 65 minutes.

This was Pulisic’s first hattrick at the senior national team level. It was arguably his best performance of World Cup qualification. His linkup play was better with a 74% passing accuracy. He was effective in the attack without having to be a solo act. His buildup play helped create the second goal. Then there was this goal and that celebration he had after the first penalty.

His mentality and feistiness were pleasant surprises. Late in the first half, he won a free kick and then stood up for himself and his teammates. A Panamanian substitute kicks the ball towards him, hitting Luca de la Torre. Pulisic moves to confront the player, needing to be held back by Tyler Adams. Captain America, for the first time, Concacaf’d. He understood the assignment.

The USMNT still does not have a reliable center forward who can finish. Ricardo Pepi has not scored since last year. Jordan Pefok missed a sitter at the Azteca. Every other striker has little chemistry with the rest of the national team or is not playing well for their club.

Jesus Ferreira in just his eighth senior team cap scored a goal. Paul Arriola gets so much stick from the fan base about his play, lack of goal threat, and playing in MLS. He scored as well, silencing questions about why he started over Giovanni Reyna, who is still regaining his fitness after injury.

The Mexico game saw this team spoil all their chances. They had no finishing at all. This game saw a complete 180, just when they needed it. From the moment VAR called that first penalty 15 minutes in, it was all too easy.

The backline was not without its nervous moments. Shortly after the first goal, they had a scramble in the box that saw Michael Murillo almost score. Zack Steffen was not great in organizing those in front of him. He did not collect the ball well. The play out of the back was not great.

Panama had chances. Zimmerman and Miles Robinson made some great emergency plays. The visitors could have finished better. With an expected goals of 0.74, the danger was largely averted. But Los Canaleros got into good positions largely on self-inflicted mistakes. A better team, better strikers would have punished them.

Maybe that free kick goal for Panama in the 86th minute was a needed wakeup call and lesson taught going into Wednesday at Costa Rica.

Maybe this is just my Couva PTSD talking. But the team raising a banner with the word “qualified” was premature and technically incorrect. If the USMNT somehow boggles this, that photo is going to age horribly. I’m all for celebrating the win, but the job is not done. Why was that banner even in the stadium given the U.S. could not qualify that day? Someone should have read the room.