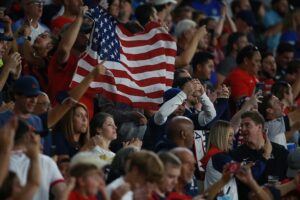 PREVIEW – The time has come! For the third time in 2021, the United States men’s national team will take on Mexico in a competitive game. This game on Nov. 12 at TQL Stadium in Cincinnati, Ohio is the biggest yet for the USMNT against its greatest rivals in CONCACAF. For both USA and El Tri, this will be the seventh World Cup qualifying game and will usher in a new era of this rivalry. Both sides enter the game as the top two teams in the CONCACAF standings with a win cementing first place.

USA can get the three peat on El Tri

The previous two competitive games for the USMNT against Mexico were finals in the summer. Manager Gregg Berhalter and his squads defeated Tata Martino and El Tri in the CONCACAF Nations League Finals in June and in the Gold Cup Final back in August. A third win on American soil for the Stars & Stripes might signify that CONCACAF has a new sheriff.

Friday night’s match will be the first-time in the MLS era that the USMNT will host Mexico in FIFA World Cup qualifying outside of Columbus, Ohio. The game remains in the Buckeye State with Cincinnati being the chosen city as the United States tries to make up for the 2016 loss at historic Crew Stadium. The USMNT enters the game with just one loss in its first six WCQ games.

The highlight of Berhalter’s squad is the return of Chelsea winger Christian Pulisic, who could be available for this Mexico match. Absences from the squad include attacker Giovani Reyna, fullback Sergino Dest, and defender John Brooks. Other notable inclusions are midfielder Weston McKennie, striker Ricardo Pepi, and defender Miles Robinson.

Manager Tata Martino hasn’t had a great record against Berhalter in big games and he is hoping to change that Cincinnati. Dating back to the two coaches times managing Atlanta United and Columbus Crew respectively, Martino and Berhalter have a deep history in CONCACAF soccer with another chapter ready to be written. El Tri has just one win in a WCQ game in America in the last two decades.

Mexico has been flying in World Cup qualifying with an unbeaten record in the last six games. They are the only unbeaten team in the region with four wins and 14 goals. Emotions will be high at TQL Stadium with El Tri desperately needing to beat the USMNT to regain some lost ground in the rivalry. The two final losses has Mexico raring for revenge. The squad is filled with the nation’s top talent, especially in the attack. Raul Jimenez, Jesus Corona, and Hirving Lozano will lead the front line with Hector Herrera, Edson Alvarez, and Orbelin Pineda headlining the midfield.