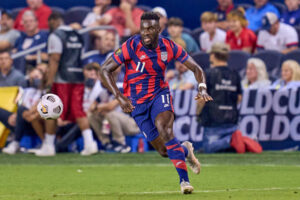 PREVIEW – The United States Men’s National Team plays Martinique tonight. It is their second of three games in the group stage of the 2021 Concacaf Gold Cup. The USMNT won their opening game 1-0 against Haiti but it wasn’t great. We now know that Paul Arriola and Reggie Cannon will be unavailable due to injuries. In this USMNT Martinique matchup, a better performance and result is needed.

Let’s start with the lineup. With Cannon out, Shaq Moore is sure to get another start. This is an opportunity for him to shine again. On the other side of the field, Sam Vines should be looking to have a bounce back 90 minute performance (he wasn’t great against Haiti outside of the goal), especially since he’s reportedly in the shop window.

Gregg Berhalter has a tough decision to make at right midfield with Arriola out and no true replacement for him on the bench. Nicholas Gioacchini was poor subbing in for him. Maybe someone gets played out of position or Berhalter goes back to the 3-5-2 to have Moore as a wingback. Lastly, as I wrote previously, Gianluca Busio and Daryl Dike should get a run out in this game.

The USMNT did a good job passing into the final third on Sunday. They got into good areas, just did not do enough to create and finish off their chances. With a few more days training to make adjustments and for players to get familiar, expect better execution in these areas.

All but five of Martinique’s roster is made up of players from the Martinique Championnat National, the nation’s domestic league. Haiti has almost half of their players based in Europe, albeit not for top clubs. Martinique also has no players who play for clubs in the U.S. or Canada. They will be less familiar with the USMNT players than Haiti was.

Based on the game against Canada, Martinique should be less organized at the back and easier to create good chances against. With that, the USMNT should win this game by multiple goals.

Give me a 3-0 win for the United States. Dike starts and scores. They get a goal off a set piece late in the second half. Gyasi Zardes comes off the bench and gets a garbage time goal.

The post USMNT Martinique Preview: Must win, must perform with Arriola out appeared first on Last Word On Soccer.