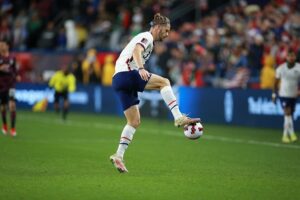 PREVIEW – The United States men’s national team begins its second half of CONCACAF World Cup qualifiers on Tuesday with an away match at Jamaica. The USMNT is on cloud nine after its massive 2-0 win over Mexico in Cincinnati to take them to first place in the group. The Reggae Boyz struggles continued after allowing a late equalizer to draw with El Salvador on Friday evening, leaving them five points outside the top-half of the table. Tuesday night’s match could be make or break for the home team while the Americans look to carry its home form on the road.

The United States is unbeaten in its first four home matches with an active three match winning streak. Performances on American soil have gotten better and better for Gregg Berhalter’s side. The same can’t be said on the road. In three road games, the United States has just one victory that was a second-half rescue in Honduras. A scoreless draw in El Salvador and an October defeat in Panama were both underwhelming performances that the team can fix in Kingston.

This final World Cup qualifier of 2021 will pose a challenge not just for the fact the game is on the road, but because Berhalter will be missing two key players. Midfielder Weston McKennie is suspended for yellow card accumulation while starting center back Miles Robinson is unavailable after his late red card against Mexico. New York City FC defender James Sands was called in as a replacement to add an available fourth natural central defender.

Jamaica can rescue its campaign with three points

The Reggae Boyz were pinned as a darkhorse to compete in this CONCACAF group but have been disappointing after seven matches. Despite the addition of West Ham striker Michail Antonio to the national pool, the Jamaicans have struggled to just one win and three draws in the first seven games of the qualifying campaign. Luckily, Antonio, Andre Blake, Leon Bailey, and Bobby Reid are all with the squad now for an opportunity at home against the Americans.

Jamaica is the last Caribbean nation to play in a FIFA men’s World Cup back in 1998. In order to qualify, they would need a miraculous stretch of wins against the teams in front of them in the table. The odds are stacked against Jamaica but three points versus the USMNT in Kingston could be exactly what gives this team a jolt towards competing again.