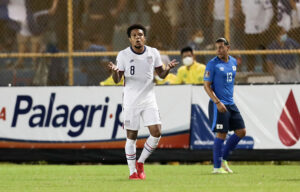 NASHVILLE – In the last decade, the city of Nashville has turned into a party city, earning the nickname “Nash-Vegas,” as every honky-tonk bar claims the “world-famous” status. The stretch of bars and music halls on Broadway is direct across the river from Nissan Stadium. After the USMNT draw with Canada, it certainly was what should be expected of Broadway on a holiday weekend. Girls clad in gaudy cowboy boots, matching t-shirts with bachelorette party phrases, and of course the Pink cowgirl hats lined the street. But what else could be seen amongst the tens of thousands that descended upon Nashville on Labor Day weekend? The solemn faces of those in their American Outlaws’ scarves, and American flag pants, suit jackets, socks, and hats, and their disappointment was palpable.

For one, despite dominating possession, they seemed to be without a clear attacking plan and were slow and predictable. Jordan Pefok couldn’t play the hold-up role well as he had no players around him to combine with and play off of…necessary for a hold-up striker. Their best success was finding Aaronson and Pulisic in the central half-spaces. But Canada dominated any ball into Zone 14, which is where Berhalter and the USMNT try to find their home in the buildup. Most people in the stadium were like those on Twitter, begging Berhalter to make a substitution. They clearly needed an injection of life around the 70th minute and it took about 13 more minutes to get one. Once they got the subs on, they looked lively and had Canada on skates and nerves for the final 10 minutes. Imagine having that group for 25 minutes instead of 10! But again, more disappointment for USMNT fans.

The Boos rained down at the final whistle, while not aimed at the USMNT players, were a fitting sound. Even more, people were upset as the fireworks went off at the final whistle like drawing Canada was a victory. Another notch in the belt representing the continual tone-deaf decisions, both micro and macro, from USSF.

First, the disappointment came with the news surrounding Weston McKennie. Gio Reyna’s injury was a disappointment in its own right, but for a different reason. Weston’s issue was an issue of self-control, which has led to the feeling of betrayal for many fans. The questions of “how could he put himself and the team in jeopardy?” are valid. As he makes the trek back to Italy while the rest of the squad goes to Honduras, the question surrounding McKennie is “where does he go from here?” But his own situation is one of many breaking points facing the USMNT right now.

The USMNT has just two points after their first to World Cup Qualifying matches, and can only get five max out of their first few games. At best it could be a one-point gap between the USMNT and Mexico after the first three. But the more likely scenario is many more, and at worst it could be up to a seven-point difference between the USMNT and the top. Not to mention the ground others will gain as well. They are in desperate need of a result on the road and are headed to a place that might be just as difficult to play as the Cuscutlan.

They are in desperate need of a positive result and at the moment, the only result that will satisfy the masses is a win in San Pedro Sula. It’s a breaking point. A win gives them a bit of breathing room. Any other result and, well, if you thought there was pressure after the Canada match it will be much greater for the next slate of qualifiers.

It could be worse! After the first two matches of World Cup Qualifying in 2017, the USMNT had zero points with only 8 games remaining. They still have 12 matches remaining, a max of 36 possible points. While that’s most likely not happening, they came into this with 42 points possible. There is still a lot of time, and a lot of matches left. Most likely anything north of 20 points should qualify the USMNT for the world cup. They only need 18 out of the next 12 matches to get there, so it’s not a total concern yet. However, they’ve certainly fed the cause of being concerned and are paying for it, meaning they’ve hit an early breaking point. Emphasis on the early…

The post USMNT has hit an early breaking point in World Cup Qualifying appeared first on Last Word On Soccer.