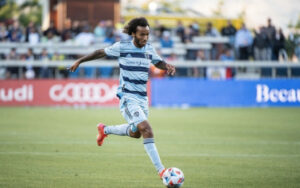 Gregg Berhalter has his 23 players for the Concacaf Gold Cup. The U.S. men’s national team manager tabbed 19 MLS players and four European players for the Gold Cup squad, which will kick off this month. This is Berhalter’s first Gold Cup as USMNT head coach.

Reggie Cannon (Boavista), Shaq Moore (Tenerife), Matthew Hoppe (Schalke) and Nicholas Gioacchini (Caen) are the European-based players heading back to the States for the Gold Cup. Meanwhile, some new faces could be making their USMNT debuts, including Sporting Kansas City sensation Gianluca Busio.

“Our priority is to win the Gold Cup. Anytime we’re competing for a trophy, we want to win it,” Berhalter said. “It’s going to take a good effort by the group, but it’s certainly a focus of ours. We know the games are going to be difficult, and as we looked at the roster for this tournament, we focused on guys who are in form and can help the team win.”

There is a mix of veteran and young on the roster. Brad Guzan is back in the fold with Sean Johnson and Matt Turner in the goalkeeper pool. In fact, Guzan, Johnson and Gyasi Zardes are the only players on the roster to be on three Gold Cup rosters, leading the way in experience.

“When you look at some of these core guys, like Walker [Zimmerman], Sebastian [Lleget], Kellyn [Acosta], Jackson [Yueill], Paul [Arriola], Gyasi [Zardes] … these are guys that have been in over these last two years and have been major parts of the team. Although it’s a young team, we think it’s an experienced team and we’re looking forward to getting even more experience in a Concacaf competition.”

Compete and win a

.
Prepare the player pool for WCQ.

The USMNT will likely see Mexico at some point in this tournament. Mexico and the USMNT have already faced off this year, with the U.S. narrowly winning 3-2 in the Nations League Final in June.

Berhalter said that, when choosing the roster for the Gold Cup, he wanted to keep the Nations Cup roster in mind too. He wanted to get a good portion of the player pool on both rosters, but refused to call them “separate” rosters.

“When we were looking at both the Gold Cup and the Nations League, we were thinking about one big roster picture, not two separate rosters. The idea was to prepare our entire player pool in a competitive Concacaf format for World Cup Qualifying,” Berhalter said. “When you look at this roster, it’s basically another group of players that are going to get the opportunity to compete to win a trophy. By the end of this tournament, we’re going to have virtually the entire player pool prepared for World Cup qualifying.”

The USMNT is in Group B with Canada, Martinique and the winner of the preliminary game 7. Below is the schedule and full roster.