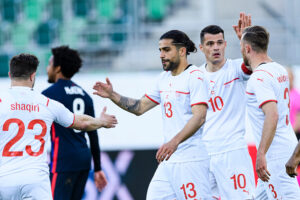 St. Gallen, Switzerland – The USMNT took an early lead against Switzerland, but despite promising play all around, a couple of mistakes were punished by the Swiss. Rodriguez and Zuber scored the goals for Switzerland.

USMNT fall to Switzerland in Friendly

Lletget got on the score sheet as the USMNT pressed Switzerland to death in the first half. A turnover inside the 18-yard box ricocheted to Brenden Aaronson who passed over to Lletget. He hit it first-time and buried the chance to put them up 1-0.

Sebastian Lletget put home his seventh #USMNT goal and third of 2021 to give the #USMNT the lead vs. Switzerland.#SUIvUSA pic.twitter.com/ACTKQS2TFF

Just minutes later, Ricardo Rodriguez cut inside and ripped a shot that deflected off Reggie Cannon and curled into the far corner out of reach for Ethan Horvath.

Late in the first half, Sergiño Dest was called for a handball in the box, pretty unfairly. Rodriguez stepped up to the spot and sent it wide, and as Rasheed Wallace once said: “ball don’t lie.”

Switzerland came out on fire in the second half, and Horvath channeled Scott Sterling stopping back-to-back 1v1 situations with Breel Embolo with his face. After the USMNT made a triple substitution, the USMNT channeled their inner FIFA 21 gameplay as the ball pinged around right to Stephen Zuber who made no mistake in blasting it home. After that, the USMNT couldn’t quite put it all together to bag an equalizer.

Up next for the USMNT is Thursday’s CONCACAF Nations League Semi-Final against Honduras. Stay tuned to live coverage of the Nations League from Last Word on Soccer.