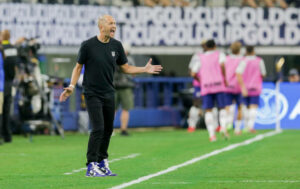 Austin, Texas will play host to one of the biggest matches USMNT has had in a fair bit. While the Nations League win was undoubtedly great, adding on a Gold Cup trophy could kickstart a run that lasts through the World Cup Qualifiers. First, however, they must get past a Qatar side that hope to spoil proceedings after receiving an invite to compete in this year’s tournament.

The Gold Cup tournament inviting outside guests is nothing new, and with Qatar set to host the upcoming World Cup, this provided the side with a great opportunity. A chance to see different styles of play, as well as garner attention for itself, using Gold Cup as a marketing tool, and it has worked beautifully. The fast-paced, high volume offense has opened eyes as they’ve hummed along into the semifinals.

Martinique result aside, all of USMNT’s matches ended in 1-0 grinds in favor of the Americans. However, the chances of this one ending in a one goal result, for either side, is hard to imagine. Unlike many of the previous teams the US have faced throughout this tournament, Qatar presents levels to why they’ll be a tough out. Tonight will be the first time ever these two teams have met on the pitch. In addition, Qatar bring with them an attack that’s unlike any the US has seen this tournament. They suffocate their opponent, drawing them in wave, after wave, of attacking pressure. There’s a reason why Qatar lead the Gold Cup with nine goals. Being able to sit back and absorb the pressure will not be a viable option for a full 90 minutes against this squad. If the USMNT want to  advance, they’ll need to meet firepower, with firepower.

Ready to go for #QATvUSA tomorrow!

Two of the top three scorers in the tournament, play for Qatar. Two of the top three assist leaders, play for Qatar. It’s not by luck they prepare in Austin,Texas to face the Americans in the Gold Cup Semifinals. It’s also not by luck they do so with the most goals (9). Manager, Félix Sánchez has been with Qatar since 2013, where he managed the younger sides, before the senior team promotion in 2017. While not many likely gave Qatar a second look heading into the tournament, they have everyone’s attention now. Akram Afif, Abdulaziz Hatem, and Almoez Ali look to lead a potent attack against a young US unfamiliar to their style of play.

While USMNT come into this one with the second best goals allowed, conceding just one goal all tournament, this is the type of match to change that. Qatar will be applying the pressure from kickoff. It will be 90 plus minutes of relentless attacking football. It will be a match where USMNT need to put in a shift similar to what we saw against Martinique. They need to focus on maintaining a majority of possession, get a lot of clean and clear looks at goal, while putting away those very chances. Odds of a five goal blowout are slim, but this match has all the makings of a shootout. Which, of course means another 1-0 win for the US.