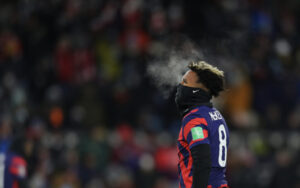 Five degrees with a wind chill down to -8 was the temperature at kickoff for the biggest World Cup Qualifier thus far for the USMNT. This is not the match we may have anticipated to be most important, but the U.S. have forced it on themselves. After the 2-0 loss away to Canada, the U.S. find themselves in essentially a must win game vs already eliminated Honduras.

Gregg Berhalter made seven lineup changes from the Canada match, most notable is dropping Christian Pulisic to the bench for Jordan Morris. Five minutes in and Matt Turner already had to take off a hand warming pouch, and players being shoved over. Concacaf levels were heating up in the cold.

A foul on first time starter Luca De La Torre gave the U.S. its first set piece of the night. Acosta swung in a beautiful ball and U.S. main set piece Weston McKennie finds the header and the back of the net. The USA had a first half goal, seven minutes in. Honduras responded with a nice spell of attack, slowing the game down. A corner kick, free kick and a couple of free play chances for Honduras that ultimately led to nothing.

A quick response from the U.S. led to a Weah strike that forced a good effort from Honduran goalie Luis Lopez. The match became end to end for a moment. Acosta got off to a brilliant start, and he continued with an excellent ball into Tim Weah who couldn’t quite finish off the goal.

There was another Matt Turner vs. The Cold moment: As a Honduras player was being treated for an injury, Turner was shown on the sideline wrapped in a blanket. Unreal weather in this one.

After a couple of fouls and cards given to Honduras players, Acosta swung in another wonderful ball that Walker Zimmerman fired into the back of the net for 2-0 USA. Acosta, Acosta, Acosta.

The halftime whistle blew on a near perfect half from the USMNT. They doubled their first half goal total of the entire cycle.

Second half brings plenty from Pulisic

As the second half got going, with no subs for the U.S., the temperature dipped down to -11 with windchill. Honduras made three changes to start the second half including subbing out the goalkeeper. McKennie and Weah open the half with a brilliant two-man attack that ended in a great save from newly subbed goalie Edrick Menjivar.

Christian Pulisic was subbed on in the 64th minute for Jordan Morris, and three minutes later he made it 3-0 off of another set piece goal. Third of the night, and third set piece goal of the cycle.

The final 25 minutes of the match finished with more of the same: the U.S. dominating possession, creating chances and Honduras looking out of their depth. The final whistle blew on a dominant 3-0 win for the USMNT. Much needed, and much deserved.

Three Takeaways from USMNT vs. Honduras

All three goals for the USMNT came off of set pieces. One from a corner and two from free kicks. Set pieces had been an issue for the USA, as they hadn’t score any goals off of them coming into tonight’s qualifier. Kellyn Acosta was a huge factor in providing excellent balls finding USMNT players.

Major shoutout not just to the players and refs, but to the fans. The fans didn’t have to brave the negative wind chill temperatures, but they did. They were loud, and they provided a solid atmosphere in a game that needed it. There was no reason for this game to be in Saint Paul, but props to the fans for making it feel like a warm home game. Also, Matt Turner vs. The Cold was one of the best subplots of the night.

Kellyn Acosta put on a man of the match performance. Beautiful set piece balls, and was steady in the run of play. No one has stepped up in claiming the backup role to Tyler Adams as the “6.” Tonight was another strong performance from Acosta that they are gonna need to solidify their depth.

Three more points and the U.S. should be well on their way to Qatar. The toughest window of the cycle is the last one, and it starts with Mexico at Azteca.

@WMckennie, a thing of beauty