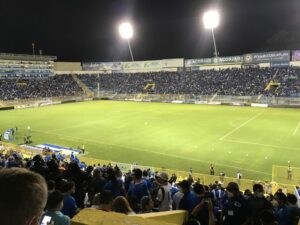 SAN SALVADOR – The USMNT draw with El Salvador to their seven month, 16-match journey that could take them back to soccer’s most important stage: the FIFA World Cup. Beneath the relentless roar of a rowdy crowd packed to near capacity, the team made their case that the World Cup in Qatar 2022 is where they belong once more.

The Estadio Cuscatlan in San Salvador opened 8 and half hours ahead of kickoff to fans. They trickled in throughout the day, wearing La Selecta’s signature white and blue. Five hours from kickoff and all of the roads were a parking lot, the roads a complete standstill with the city heading toward the match. Fans wove flags from the windows of cars. They drank beers, waving to the U.S. Media bus from the back of trucks.

The curving roads just outside Estadio Cuscatlan were a block party by early afternoon. Food stalls, shirts, flags for sale. What felt like half the city of 6.5 million were gathered there to cheer on La Selecta, singing, dancing, eating together in the street. Inside Estadio Cuscatlan, the stadium had at least 10,000 people already in it four hours out, and by kickoff it was packed to over capacity, with fans spilling out of every aisle, concourse, and alley.

The festivities met the occasion prior to kickoff. The Concacaf Octagonal World Cup Qualification series of matches began today in earnest across the region, and in El Salvador it began with fireworks, confetti, cruisers flown over the stadium, and a national anthem belted out by the home crowd like I’d never heard one sung out before.

The United States Men’s National Team came out in a 3-2-3-1 formation. The captain’s armband went to Tyler Adams of RB Leipzig. Adams is the youngest USMNT player to wear the band in modern US history. A fitting captain for a team of record youth talent.  There were a few interesting additions to the starting line-up. Though perhaps no surprise to those tracking Gregg Berhalter’s pre-match interviews and patterns over the past year. With Miles Robinson and Tim Ream starting in the back line, it was clear Berhalter was prioritizing experience in Concacaf over appearances in top leagues. It’s also possible Gregg opted to rest a few players for tougher competition along the packed 3-game window ahead.

Fans of the United States Men’s National Team have been rightfully bullish about this team. The fans alongside most pundits have been feeling confident this team would come to El Salvador to scoop points- at least one, and probably three. They’ve been confident they’d come out of San Salvador with a  result reflective of the incredible depth of skill on this team, of the leagues these players compete in, of how far we’ve grown in tactical skill and achievement in the gap between tonight and Couva.

But the first half of play was a messy, ill-contained reminder that the fields of Concacaf have wrenches to throw in any advantage of plan or prowess.

The United States was unable to keep hold of possession for any significant length of time. With possession nearly net even between the two sides in the first forty five, the match wasn’t a match of possession football at all, but rather a rapid intercession of attacking transition and defensive transition for both sides. They looked flustered, were caught flat footed, and didn’t bear the confidence and swagger this team is capable of and will need to progress well in qualification.

El Salvador also failed to convert and made mistakes in possession. They did came up with a few chances in attacking transition, crossing the ball into the box toward Matt Turner more often than we would have liked. They looked most lethal on the set piece, with a handful of corners providing shots just off target, just over or just nicking off the post. Alex Roldan of the Seattle Sounders – whose brother plays on the USMNT side- looked particularly strong.

The second half opened immediately with a shot from Konrad and the suggestion that things in this half might change. But it was immediately more of the same; failure to keep possession, too many touches, bad passess, and getting beat in defensive transition. Where El Salvador looked most lethal, again, was on the set piece from the corner. Their best chance yet in the game came in the 56th minute. A corner delivered into the box from a La Selecta player who hammered it to the corner, where Matt Turner met the shot with a diving save.

Berhalter sent in Jordan Pefok for Josh Sargeant, Antonee Robinson for Sergino Dest, and Kellyn Acosta  in for Konrad de la Fuente at the 65-minute. The team had now transitioned to a 4-3-3. The game continued on in a similar pattern, but not without some exciting chances. A McKennie cross to Pufok in the 75 minute was one of the best chances the US eked out.

It was messy, but it was a point

Despite the added energy, and a few additional chances, the United States never did get the ride shot off, never did create more chances, never seemed to break the rhythm of attacking transition to defensive transition. It was messy. It was Concacaf. It was a point. We go again on Sunday. The United States Men’s National Team will play Canada at home in Nashville for the second leg of this 3- match journey.

Photo by of Megan Swanick.