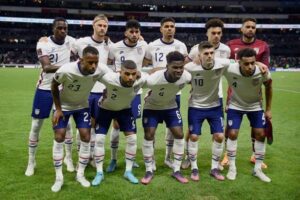 EDITORIAL – On Thursday night, the United States Men’s National Team got a scoreless draw against Mexico at Estadio Azteca. The Americans had the two best chances of the game with Christian Pulisic and Jordan Pefok both unable to finish. For El Tri, their best looks came when they took advantage of a defensive breakdown by the visitors.

Mexico controlled the match for stretches with 63% possession and more shot attempts (11-9). They had trouble breaking down the United States who were very disciplined. The visitors were the more dynamic side in the attack and created despite only attacking with four or five players at times.

Disappointing result given the performance/circumstances:

The USMNT had the two best chances to score with Pulisic having an open look at goal but shooting right at Guillermo Ochoa in the 35th minute. Then Pefok had a tap in the 73rd set up by Giovanni Reyna, but the shot looked more like a clearance by a center back.

Both teams played more scared to lose than excited to win. Mexico was not great. Both are lacking a confident and in-form goal threat. This was not the best performance by the USMNT in Mexico but it was the biggest gap in performance played in my lifetime at this location. I can’t remember the last time the USMNT had two clear cut chances to score at the Azteca like those two. This game should have been Dos A Cero.

Combined with the reduced capacity crowd with the USA fans making the most noise at times, this is the best chance the Americans have never had to win a game in that stadium. They did not. Positive disappointment.

Tim Weah again had a good match on the ball and in the final third. He was a right wing chance creating foil to Pulisic. DeAndre Yedlin did some good work behind him and was a veteran presence in defense. Both were chosen by manager Gregg Berhalter to start despite being one yellow card away from suspension. Both got cautions in the first half, with Weah’s card being a bit harsh.

They are both suspended for Sunday’s match against Panama in Orlando. Reyna would be expected to come in as a starter with Paul Arriola the likely bench option. Gio is coming off injury but was great off the bench in this game. He had a great sequence where he dribbled through several Mexico defenders. It came to nothing in the end. Wing play was critical in this game as all three players. It will need to be for the USMNT to qualify.

Erik Palmer-Brown subbed in for Yedlin in the second half. He or George Bello would likely play in Yedlin’s place against Panama. Both are lacking in senior national team experience, so say nothing of their lack of World Cup Qualification experience and continuity.

How fans and pundits remember this game will depend on what happens in the final two matches of qualification. Berhalter started mostly a first choice team. That group played at altitude with three of the five substitutions happening after the 80th minute. Ricardo Pepi was inert. Pefok is in this camp because he is the only inform center forward in the player pool. He was called in to finish the great chances others were not. And he failed.

This was the least important game of this window. And Berhalter went for the win but only got a draw. Pepi and Pefok could be down given how they played. Maybe this performance and its “positive disappointment” are somethings to build on for Panama and Costa Rica. Maybe the personnel decisions will leave the team exhausted come tomorrow night. On top of all of that, they again go into a must win game without a striker to believe in.

If the U.S. beats Panama tomorrow, all will be forgiven. If they fail to qualify, many will look back at this game, the lack of execution, and GGG’s decisions with scrutiny.