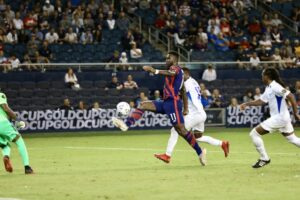 KANSAS CITY – The United States Men’s National Team are headed to Concacaf Gold Cup knockout stage. On Thursday night, the defeated Martinique in a blowout. Unlike the game against Haiti, the result was convincing. The performance was convincing as well, highlighted by a Daryl Dike brace.

Manager Gregg Berhalter adjusted the lineup as anticipated and desired by USMNT Twitter. Dike and Matthew Hoppe started up top. Gianluca Busio started in midfield. Berhalter went with three at the back, allowing Shaq Moore to play at right wing back with Paul Arriola injured.

The chance creation and finishing started early and often. Just 14 minutes in, Dike opened the scoring. George Bello ran a ball down near the end line. He found Hoppe who whipped a cross into the box. Dike was first to it in the air with the header.

Samuel Camille was credited with an own goal nine minutes later. It was chaos in front of the Martinique goal with Hoppe battling the ball, finding Busio who shot the ball off the crossbar. Dike was the first to the rebound, but could not get much on the header. Camille was able to block the shot, but in doing so, heel-flicked it into his own net.

The half ended 2-0 with Martinique getting just one shot on goal from midfield.

The Yanks finally converted on a set piece five minutes into the second half. Wide open, Miles Robinson smashed the ball into a the net from a few yards out on a recycled ball off a corner.

Dike made it 4-0 on 59 minutes. Cristian Roldan played a great 1-2 with him from midfield, allowing him to run onto goal between a gap in the backline. He took a touch, flying past the last two defenders, and chipped goalkeeper Gilles Meslien with a deft touch.

Five minutes later, Martinique pulled one back. Substitute Kellyn Acosta got caught out of position, pulling an attacker down in the box. Emmanuel Rivière converted the penalty, catching Matt Turner flatfooted on the stutter step.

Gyasi Zardes scored his first of the tournament in the 70th minute, coming off the bench. Roldan with Route One from the defensive third. The ball got past the outside defender. Zardes continued his run, threading the ball between the keeper and defender and inside the far post.

Nicholas Gioacchini scored in the final minutes to finally get on the score sheet, after getting several opportunities in the match. Busio set him up for a tap in from six yards out.

He makes it FOUR for the @USMNT

Goal differential made up: With a win by five goals, the United States and Canada are now tied on goal difference. Berhalter emphasized this in the second half. This sets up a Super Soccer Sunday as Canada play the U.S. Whomever wins the group likely gets put on the opposite side of the bracket as Mexico, avoiding them until the final.

The kids show up: A Daryl Dike brace with Hoppe and Gioacchini getting on the scoresheet. Busio bossed the midfield. Robinson and James Sands were clean at the back.

Job done, so far: Martinique is clearly the weakest team in this group through two games. It was a great performance and win, but it was against a bad team. The USMNT are through to the knockout stage. Job done so far, but (individual and team) expectations have not been met, yet.