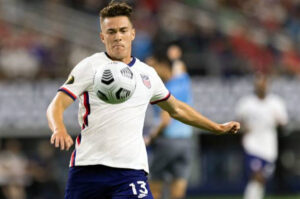 ARLINGTON, TEXAS – The United States Men’s National Team played Jamaica on Sunday night in the 2021 Concacaf Gold Cup Quarterfinals. The winner would advance to the semifinals to play Qater. The game ended up being a Concacafy mess, and a moment of late quality decided the match.

The first half was a mess to say the least. Both teams struggled with the hybrid grass/turf pitch. Passing and link up play were not good, almost causing the USMNT to give up a goal seconds in. The first half was made further disjoined by several injury stoppages for Powell, who was eventually subbed out for the injury.

Both sides created chances after playing more direct and capitalizing off turnovers in the press. Junior Flemming and Daryl Dike both had good looks at goal.

Matthew Hoppe had the best chance for the U.S. in the 22nd minute. On a long ball into the box, he forced Andre Blake into a reaction save at the near post. The Americans remained toothless on set pieces.

Decordova-Reid spoiled the best chance of the half. In the 41st minute, Kemar Lawrence found him in space right in front of goal. Reid did poor on the shot, effectively passing the ball to goalkeeper Matt Turner.

The second half was equally clunky with both teams struggling on the ball and with the playing surface. The best chances came off Route One and turnovers in the defensive third.

Miles Robinson made a great tackle on 56 minutes, stealing the ball and winning a free kick on a 2-on-1 for Jamaica with James Sands caught out of position. Andre Gray missed a chance for a tap in from four yards out on a set piece on 78 minutes.

The USMNT broke the deadlock on 83 minutes. With Gyasi Zardes subbing in, the U.S. was lumping service into the box. After a good sequence, Cristian Roldan got the ball in space and crossed to the back post. Hoppe, Zardes, and Blake all went up for it with Hoppe getting to it first to head it into the back of the net.

HOPPE GIVES THE @USMNT THE LEAD IN THE 83RD MINUTE!

Matthew Hop Hop Hoppe: That Matthew Hoppe goal is the stuff that starts a legend with the national team. He had a great game overall and was often the only creative outlet. The goal was deserved, as messy as it took to get there.

Concacaf gonna Concacaf: This game was a mess. The field was inexcusably poor. Neither team played great. It was chippy. Jamaica had a great game plan and executed it well, other than finishing.

Survive and advance to evaluate: It wasn’t pretty but Gregg Berhalter has another game to evaluate this USMNT C team. Acosta and Robinson were good defensively. Hoppe was MOTM with the goal. Everyone else had a mixed bag performance. It was imperfect, but it was just enough.