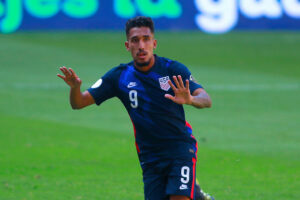 Guadalajara, Mexico (18 January 2021) – The US U-23s have a history of disappointment in Olympic Qualifying. The last time USA qualified for the Olympics Benny Feilhaber qualified to be on the roster age-wise. He is now retired. So going back to the futile attempt under Klinsmann, and the infamous slip through Sean Johnson’s hands against El Salvador, forgive USA supporters for doing the “here we go again” routine when Ferreira’s shot rang off the post early and then David Ochoa had to rescue the US back line. Ultimately, Ferreira made good, and the US hung on for dear life as the Jalisco heat sapped their energy.

The USMNT kicked off their group play with the earlier news of the day being Tanner Tessman’s addition to the squad over an injured Uly Lanez. Lanez was going to be the primary playmaker if healthy, but an ankle injury will keep him out of the tournament. The USMNT ran a slightly different system, pressing Costa Rica to death in the first half. They almost got a FIFA-esque video game goal but Ferreira couldn’t do anything with the gift he was given by Costa Rica’s goalkeeper.

Ferreira made good in the 35th minute, blasting home a ball that fell to him at the top of the box. His goal was the lone tally and David Ochoa stood on his head making multiple saves throughout the game, including several highlight-reel stops. Ochoa should rightfully earn man-of-the-match awards for his performance. His inclusion in the gameday lineup was surprising, as San Jose Earthquakes ‘keeper JT Marcinkowski was the expected starter. But Ochoa got the nod and filled in well.

USA will momentarily claim first place in the group until Mexico can properly dispatch of the Dominican Republic. It sets up Mexico’s match against Costa Rica as the decider for whether or not USA’s match against Mexico will have any meaning.