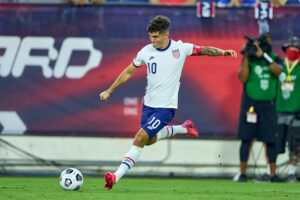 Team USA is focused on the Honduras match despite Weston McKennie’s suspension during the first week of World Cup Qualifying. The news came to the team hours before they took on Canada at home in Nashville, Tennessee. Fans found out shortly after in part due to Weston McKennie’s Instagram post, which read: “Unfortunately I am suspended for tonight’s match due to violation of team COVID protocols. I am sorry for my actions, I will be cheering hard for the boys tonight and hope to be back with the team soon.”

The United States Men’s National Team opened their World Cup Qualification campaign before a packed house in San Salvador, El Salvador, where they drew La Selecta 0-0. A few days later the squad took on their northern neighbors at Nissan Stadium in Nashville. They drew Canada 1-1. With two draws the United States Men’s National Team is tied for fourth place in World Cup Qualification standings. A fourth-place finish would put them in an intercontinental playoff to earn a spot in Qatar.

Ahead of tonight’s match Matt Turner, Brendan Aaronson, Christian Pulisic and Gregg Berhalter spoke to members of the media about their outlook, the path forward, and the atmosphere in camp following the suspension of Weston McKennie.

Matt Turner Says A Precedent Needs to Be Set

Matt Turner, starting goalkeeper for the United States this cycle, was up first for the media. Turner was immediately asked about the atmosphere in camp given two disappointing performances, compounded by Weston McKennie’s controversial and conspiracy-laden suspension. Turner told the media the team was entirely focused on Honduras. When asked if the team agreed with the decision made by Berhalter, Turner said that it ultimately did not matter. “A precedent needs to be set”.

Brendan Aaronson is Focused on How to Win

Brendan Aaronson, a Philadelphia Union homegrown talent now playing for RB Salzburg joined the media next. Over the noise of passing traffic, before a backdrop of mountains and palm trees in a humid Honduran afternoon, Aaronson repeated the laser-focus Turner portrayed to the media. Aaronson focused his comments on what the team needed to do to win their next match. “I love to win”, he said, emphasizing that the team intended to in San Pedro Sula.

Christian Pulisic Acknowledges Honduras Will Be Ready to Battle at Home

Christian Pulisic spoke next. When asked about the mentality of the group, he said: “I think the group is ready to respond”. Pulisic acknowledged they faced Honduras in a tough environment at home in San Pedro Sula, a home team who needed the win as much as they did. He said they’d be “A team that’s going to be ready to battle and get their first win as well.” He maintained that they were up to the task, “I know this team will be ready.”

The last to speak with the media was coach Gregg Berhalter, who’s been under fire given the recent performances in this window. Gregg took the first few questions on Weston, providing no new information beyond Weston breaking team protocol.

Gregg began to push back on media questions halfway through his allotted time. When asked what Weston said to the team before departure, Berhalter told the media they were now in the space of “information that the media does not need to know.” He told the media “this is a team matter”. Questions moved on to tactics, conditions, and how he plans to adjust the squad’s lackluster attack. Berhalter took the questions, adding, “Thank you for asking a question about soccer”.

The post USA is Focused on Honduras Despite Weston McKennie Suspension appeared first on Last Word On Soccer.