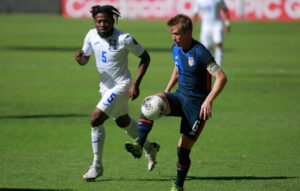 Dreams of punching a ticket to Tokyo is over for the US U-23 men’s national team. The Jason Kreis-led group fell to Honduras, 2-1, on Sunday night in Mexico, failing to qualify for the Olympics for the third-straight cycle. Meanwhile, Honduras will be heading to their fourth-straight Olympics.

The other spot will be scooped up by either Mexico or Canada.

The United States played an extremely defensive match for the first 40 minutes. However, disaster struck to the team when, just seconds before the halftime whistle blew, Juan Carlos Obregón Jr. scored the opening goal. Obregón scored off a free kick, finding himself unmarked at the near post and sending it past David Ochoa.

Ochoa had a rough outing in net for the US U-23.

Ochoa had a howler in the 47th minute, giving the United States a horrendous start to the second half. Instead of switching to the left side of the pitch, Ochoa attempted to play the ball to a teammate but hit it directly at Luis Palma, who deflected it in for Honduras’ second goal.

Jackson Yueill, who has been captaining the US U-23 team throughout the qualifiers, scored off a banger in the 52nd minute. Yueill’s goal provided some spark, but the team could not capitalize.

The @USYNT is back in it! What a hit from the captain Jackson Yueill

Controversy surrounded the final, especially in the 75th minute when Wesly Decas and Jonathan Lewis were fighting for the ball. Decas looked to shove Lewis to the ground, but a foul was called on Lewis.

In the end, the United States couldn’t muster up enough for a comeback. While the US women’s national team will vie for another Olympic medal, the tournament will be without the US U-23 for the third-straight cycle. Now, the men’s program looks toward the Gold Cup and the Nations League.

The post US U-23 MNT fail to qualify for the Olympics for third-straight cycle appeared first on Last Word On Soccer.