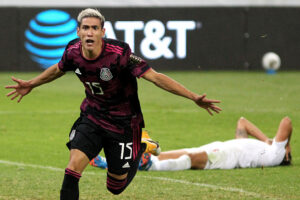 It is official. Thanks to a Uriel Antuna goal, Mexico is heading to their third-straight Summer Olympics. This is while Canada was unable to qualify for the Summer Olympics for the first time since 1984. James Pantemis, the Canadian goalkeeper played very well in the first half. However, the story was very different in the second half and as a result, Mexico will advance to the Tokyo Summer Olympics in Japan.

Canada hardly had any chances to score

Canada had no real chances to score throughout the game. The only shot on goal was a Tajon Buchanan shot in the 45th minute. However, this was easily saved by Mexican goalkeeper Sebastián Jurado Roca. Buchanan also had chances in the 41st and the 49th minute of play. However, both shots missed the target.

In this particular game, the Mexicans looked faster than the Canadians. It was difficult for Canada to generate any scoring chances as Mexico had 66 percent of the possession.

The Uriel Antuna goal was the difference against Canada

The goalkeeping error by Canadian Pantemis played a big role in shaping the result of the game. His pass near the goal line was intercepted by the Mexicans. As a result, it ended with a Uriel Antuna Mexican goal in the 57th minute.

The game is over:@miseleccionmx 2@CanadaSoccerEN 0

Mexico had a large number of free kicks

Mexico’s speed was too much to handle for the Canadian defence. For example, in the 15th minute, Lucas Dias incorrectly challenged Vladimir Loroña. Then in the 45th plus first minute Zachary Brault-Guillard fouled Sebastián Córdova for the free kick. As a result, Brault-Guillard also got a yellow card on that play. Then after the first goal was scored the momentum completely changed.

Canada made three fouls in the 59th, 63th, and 64th minutes of play. However, the foul in the 64th-minute was the one that proved fatal for Team Canada. This is because it led to Mexico’s second goal. Johan Vásquez hit the post in his first shot, but got the rebound and scored the insurance goal for Team Mexico.

From there, it became very difficult for Canada to catch up as Mexico had all the momentum in the world. Mexico would not score another goal but the damage had already been done.

Canada U-23s fails to qualify for the Tokyo Summer Olympics

It is a disappointing but expected result. Canada was the heavy underdogs facing possibly the best Concacaf team in the region. They actually played admiringly well in the first half. It looked like they were gaining momentum as the game progressed and a big part of that was Pantemis’ performance in the first half.

First Half Summary:#CanM23‘s goalkeeper James Pantemis is the player of the half. #PasiónyOrgullo has 65 percent of the possession.#CANMNT played well in the first half not allowing a goal and having a 95 percent passing percentage.#CMOQ | 0-0 | #MEXvCAN

However, one goalkeeping mistake by Pantemis and the game turned over its head. Canada had difficulty creating chances to score and Mexico won the game. It is also important to note that Canada only scored three goals in four games. They had trouble scoring goals throughout the tournament since that 2-0 win over El Salvador.

The promise of the Canadian men’s national team

Looking at the plus side, Canada has made the semi-finals stage of the Concacaf Men’s Olympic Qualifying cycle for four straight cycles. This means that the Canada U-23 team can be considered a top-four side in Concacaf. While this is little solace to the Canada U-23 team that did not make the Olympics, once again it shows promise. With opportunities being provided now with the Canadian Premier League, these players are now getting playing time they would not have gotten before. Furthermore, if Canada can make the top four of the FIFA World Cup qualifying like they did in the Olympics qualifying, they give themselves a good chance to qualify for the FIFA World Cup in 2022 in Qatar.

This will help the Canadian men’s national senior team develop as they look to qualify for the first-ever FIFA World Cup appearance since 1986. Their next game was delayed by a day because a few players from the Cayman Islands tested positive for COVID-19 according to Jonathan Tannenwald, soccer reporter for The Philadelphia Inquirer. Therefore, the second World Cup qualifying game will take place on Monday at 6:00 p.m. ET according to Canada Soccer. The game will be shown on OneSoccer. In Canada’s first FIFA World Cup qualifying game for the 2022 FIFA World Cup, they defeated Bermuda 5-1 thanks to a Cyle Larin hat-trick.