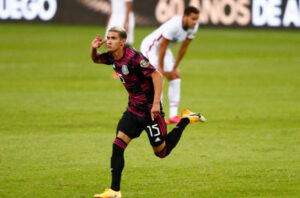 GUADALAJARA – Mexico and Uriel Antual played the United States and Djordje Mihailovic in the final group stage game of Group A at the Concacaf Olympic Men’s Qualification. United States U-23 coach Jason Kreis rotated the squad with both teams having qualified for the knockout rounds.

El Tri were the better team from kickoff. The U.S. tried to play out of the back and Mexico pressed high, especially when the center backs received the ball. This led to turnovers and chances.

Mauricio Pineda made a great tackle on Manuel Mayorga 27 minutes in, after he got around Julian Araujo and was looking to shoot in the box. The Yanks responded with playing direct and drawing a few set pieces that provided good looks. Mexico goalkeeper Luis Malagón sustained a wrist injury off one of them and had to be stretchered and subbed off.

Mexico deservedly went 1-0 up just before halftime. The high press forced a bad pass by Sebastian Soto. Uriel Antua ran onto it unopposed, dribbled, and scored.

The second half was very similar to the first. It wasn’t until a triple substitution by the U.S. in 61st minute that things started to turn. The passing in the attacking third was better, leading to a few half chances Djordje Mihailovic. Mexico had several looks in transition but neither team could find a goal.

The match ended 1-0, with Mexico winning the group on nine points and both teams advancing to the semifinals on Sunday.

This game didn’t matter: This game functionally was irrelevant. Both teams had already qualified for top two in the group. Both will play a weaker opponent in their semifinal match on Sunday. Kreis played a reserve lineup. No one got suspended or injured. That’s what matters.

Some individuals shine: Henry Kessler and Mihailovic had some good moments despite on overall underwhelming performance. They offered very little going forward with the bench players.

Playing out of the back: As in previous games, the team played out of the back for much of the first half. It didn’t work with Mexico pressing high, leading to the goal. If that’s better against a worse team on Sunday, they should be ok.