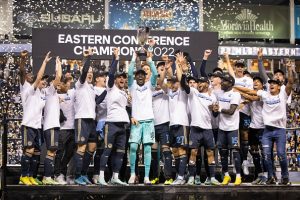 CHESTER, PA – Despite an early second-half goal from NYCFC’s Maxi Moralez, the Philadelphia Union rallied late with goals from Julián Carranza, Dániel Gazdag, and Cory Burke to defeat the reigning MLS Champions 3-1 and book the clubs ticket to the 2022 MLS Cup Final.

WE ARE @MLS CUP BOUND

From the backline to the forwards, the Union put in a solid team performance behind head coach Jim Curtin. Regardless of how frustrated Philadelphia might have felt following a 16th-minute goal from Gazdag ruled offside, going into halftime with an even scoreline, or allowing an early second-half goal to NYCFC, they showed resilience to dig this win out at home.

In front of their fans at an absolutely electric Subaru Park, players like Andre Blake, Jakob Glesnes, Kai Wagner, José Martínez, and the three-goal scorers, all put in some of their best shifts and no doubt it was vital in securing the Union a spot in their first ever MLS Cup Final.

NYCFC Couldn’t Spark its Own Attack

Despite notching the one goal with some excellent passing and a nice finish from Moralez, NYCFC’s attack was severely slacking throughout the match while dominating the possession with 65 percent, creating 10 shots, and forcing three big saves from Blake. It’s clear NYCFC wasn’t at 100 percent of strength with several key players listed on the injury report prior to matchday but missing Talles Magno, in particular, was a big blow.

Players like Héber, Gabriel Pereira, and Santiago Rodríguez who caused issues for Miami and Montréal in the earlier rounds we’re non-existent on the pitch for long stretches as the midfield struggled to convert possession into attacking opportunities. And with three at the back in defense, the two wingbacks in Kevin O’Toole and Anton Tinnerholm truly labored the most in battling with the quick counterattack of Philadelphia leaving them helpless going forward.

22-Year-Old Carranza with the Match of a Lifetime

Not only did the 22-year-old Argentinian produce the Union’s opening goal catching the NYCFC opposition off-guard on a substitution to tie the score at 1-1, but he also managed a gorgeous headed assist just minutes later to push Philadelphia into the lead for what would be the game-winner. Culminating in one of his best performances of the 2022 MLS season following a 14-goal, 6-assist campaign, the U23 Argentinian prospect was awarded Man of the Match vs New York City as Carranza practically carried the Union to their first MLS Cup Final appearance.

While he was fairly quiet in the Union’s opening matchup with Cincinnati, expect Caranza to be a key piece in the Philadelphia attack after a major performance to defeat the reigning champs.

With the number 1 seeded Union fighting for a win over NYCFC, they’ll advance to the 2022 MLS Cup Final to face the Western Conference Champions in LAFC on Saturday, October 5 at Los Angeles Banc of California Stadium. This will be the first time since 2003 that both top-seeded squads from their respective conference will advance to the MLS Cup meaning we should be in for an incredible matchup between two exciting and loaded sides in this year’s MLS season finale.

With this matchup marking the first MLS Cup appearance for both Philadelphia and LA, we will have a brand new club adding a star to their crest at the completion of this MLS campaign.