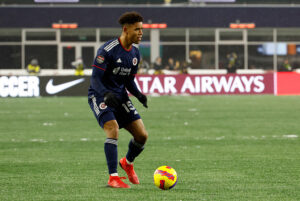 Foxborough, MASS – For the third MLS game in a row, a Western Conference side lay in wait for the New England Revolution. It will be a battle of two unbeaten teams at Gillette Stadium yesterday. Real Salt Lake knocked the Sounders out of last year’s playoffs and they beat them once again in their last meeting. Meanwhile, the Revs were in action in mid-week, where they dominated Mexican side Pumas 3-0.

In the early stages of a season, building momentum is key for all teams. This is especially the case for New England who is of course defending the Supporters’ Shield this year, as well as going in search of an elusive MLS Cup. This sentiment was reinforced by head coach Bruce Arena ahead of this weekend’s fixture, reflecting on the CCL victory: “we’re getting into in the early parts of the season so our expectations are we get a little bit better every game and we certainly saw that on Wednesday night.”

It is heavily trodden ground but the need for progression and building a platform is particularly important in the situation that the Revolution find itself in. In the words of Arena: “I think we’ve gotten better every game which is important because as I’ve said previously, we didn’t have a proper pre-season because of the loss of those CCL games [against Cavaly]”.

Six goals have been scored across the three games in all competitions thus far for the Revs, in which they have of course remained unbeaten. Fullback Brandon Bye was full of praise for the “great attacking players” on the team, going on to say that “I think it’s important we keep feeding them and all good things can happen when they get chances in front of the net.” It’s not all about the forward line either with clean sheets being kept in Mexico City as well as in the win over FC Dallas.

What of New England’s opponents?

Freddy Juarez’s RSL has begun the campaign with consecutive clean sheets, the first time this has been achieved in the club’s history. On top of that, the team from Utah has dominated this fixture in the past- ten of the last twenty meetings going the way of RSL whilst six games ended as a tie.

Their unbeaten start to the season with a draw in Houston before beating Seattle certainly hasn’t got unnoticed, Arena commenting that “to deal with all of that and beat a good team is an impressive statement on their part.” The ‘all that’ in question was torrid weather conditions that led to a two-hour mid-game stoppage.

There is actually a familiar face in the opposition ranks. After several very successful years in New England, Scott Caldwell made the move west and American international Bye spoke very highly of him indeed. “Hopefully he’s doing well in Salt Lake City, yeh it’ll be good to see him again. He’s a club legend here, I have a lot of respect for him.”

The 26-year-old went on to say, in lieu of the fast-approaching fixture, “we’re going to need all 20, however many players we have on the team for this big stretch of games, so I think everybody’s feeling good, feeling involved and ready to go.” Particularly in the wake of covid and the pandemic, the unification of a squad and the use of all of the available resources are key.

Team selection for the unbeaten duo

As is often the case in the Revolution camp, Arena held his cards close to his chest when discussing possible changes to the XI for this clash with fellow unbeaten outfit RSL. “There’ll be some turnover for sure, what exactly that will be we’ll obviously finalise that tomorrow. We’ll have some changes” were the coach’s exact words.

On the topic of Bruce and he of course recently broke a big record in MLS, Bye musing the following with a smile on his face. “It’s exciting to see him break those records because the wins keep ticking along and he keeps continuing to do what he does.” The defender also said “I think he’s been very important” regarding the impact his coach has had on his development and career so far.

Bruce still got it

Albert Rusnak is the notable departure from RSL’s ranks in the off-season. Meanwhile, star-man Damir Kreilach was absent from the win over Seattle having sustained an injury following the goalless draw versus the Dynamo. Notable players include USMNT forward Bobby Wood, former Revolution man Caldwell and Cali native Justen Glad, with a young duo of fullback Aaron Herrera and goalkeeper David Ochoa yet to feature for the unbeaten RSL.

Real Salt Lake may not be one of the flashier teams in offer in MLS but that isn’t reason enough for them to be undermined by Bruce Arena’s men. Both sides will go in search of continuing their unbeaten starts to the season and given the home-field advantage, the Revs will be many people’s favourite to prevail in Massachusetts.